Young actors speak out about the gun violence that haunts America 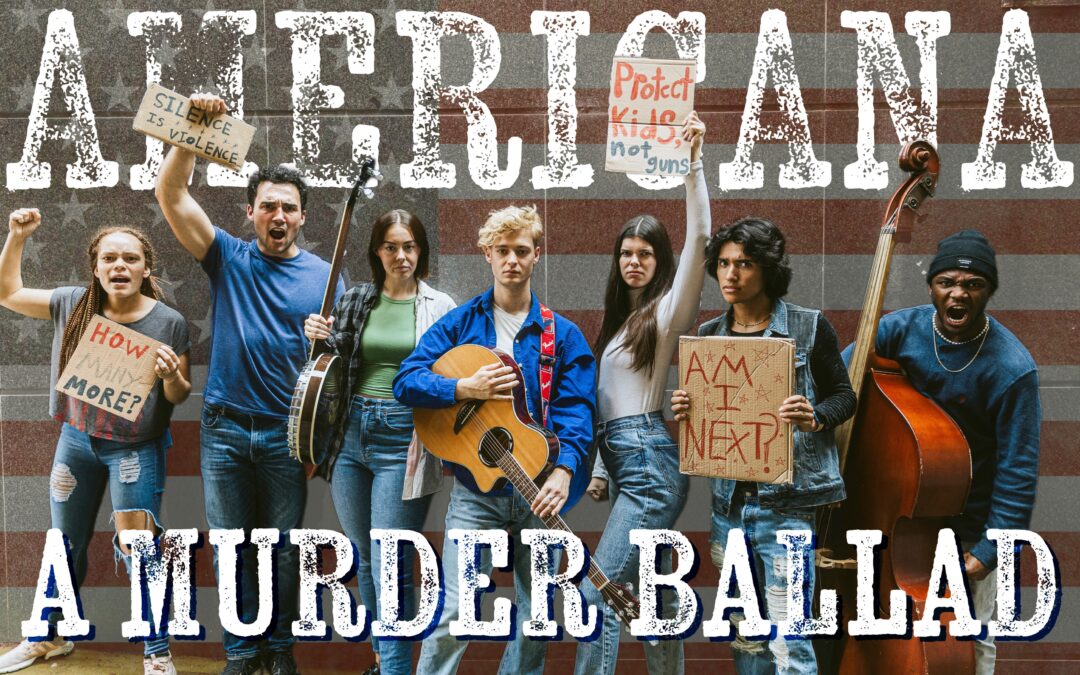 With a mass shooting every week of 2022 in the USA – young American actors in Edinburgh for the Fringe have spoken about the gun violence that haunts their nation.

Hayley Powell and Zoe Prior are appearing in Americana: A Murder Ballad which looks at how young people are caught in an endlessly repeating cycle of killing, in a culture obsessed by crime and murder.

Schools and colleges have been the scenes of some of the worst atrocities, and the killers have included heavily armed teenagers.

The play is the latest work by Scottish writer Morna Young whose musical The Stamping Ground has just earned glowing reviews including ★★★★ from The Guardian and was called “a stunning piece of new musical theatre” by thePress and Journal.

Hayley and Zoe live in an environment where the threat of attack is so serious that from primary school onwards children have regular drills in case of “active shooters”.

The play addresses the reality of Zoe and Hayley’s lives – and the very real fears of their generation.

Zoe said: “We were told about a school in Scotland where a boy had brought in a knife – in America it would have been a gun. It’s terrifyingly easy to get a gun in America, even for teenagers.

“This is a play that looks at the reality we live with and what goes on in the mind of a shooter – mass shootings are a very real threat for us.

“It’s about how we are caught up in this cycle of violence that never stops. It’s really hard to think that if I have kids, this is the situation they will be in.”

For Hayley one of the issues is being in a culture where the response to guns is often more guns.

She said: “One day at school a voice on the intercom alerted us about an on-campus intruder, but my teacher kept on teaching saying it would be fine – because he had a gun in his drawer.

“I was not reassured. Knowing he brought a gun to school each day and kept it in his desk just added to the craziness.”

Another major concern is that Americans have such ready access to weapons.

Hayley said: “There is no reason to have an assault rifle. You don’t use assault rifles or pistols to hunt for food.

“And yet you have teenagers getting hold of them. Teenagers who might be going through all sorts of hormonal changes.

“So here we are in the land of opportunity where you have the opportunity to make decisions that end people’s lives. And that should not be allowed.”

Hayley is a recent graduate and Zoe is an undergraduate from the drama course at Pepperdine University in California.

Both are at the Fringe as part of the successful Pepperdine Scotland cultural exchange programme which enables students to work with leading Scottish theatre-makers to create a work addressing a social justice issue and present it at the Edinburgh Fringe.

The play’s characters tell their own stories through song – with script and lyrics by Morna, set to original music by Davey Anderson and performed by a live band on banjo, acoustic guitar, double bass and drums.

Davey said: “There are lots of great vocalists in the cast and I think that audiences will be seduced by the songs.”

He has a fascination for the connections between Celtic and American music, and how forms like the murder ballad were exported by Scottish emigres and then returned across the Atlantic after becoming a mainstay of many US musical genres.

The traditional murder ballads often began as a form of “tabloid” reportage.

Davey said: “People love murder ballads – the combination of sex, violence and sensationalism. The traditional songs were often connected to real events – they were like true crime dramas, and just think how popular they are today.

“The problem can be that when songs are sung over and over again down the generations we get lost in the pretty words and tunes and forget what they are really about.

“Americana re-engages people and re-sensitises them to the idea of songs being about acts with real consequences.”

Morna Young is an award-winning playwright from Moray. She was named Scots Writer of the Year at the inaugural Scots Language Awards in 2019. Lost at Sea, Morna’s debut full-length play, premiered at Perth Theatre in 2019 before touring No. 1 venues in Scotland. Subsequently, the play won two Critics’ Awards for Theatre in Scotland (CATS), a Broadway World Award and was a finalist in the Herald’s Culture Awards.

Morna was recipient of the Dr Gavin Wallace Fellowship (2017), a New Playwrights Award (Playwrights’ Studio, Scotland, 2014) and the ‘Tomorrow at Noon’ award for female playwrights  (Jermyn Street Theatre, 2018). Her international work includes The Traverse’s ‘Scotland-in-Japan’ residency, playwright-in-residence for BATS Theatre in New Zealand for three-months and a residency in Rome as part of the Muriel Spark 100 awards (both 2018).

Morna is also a multi-instrumentalist, composer and singer/songwriter, and half of the band Folkify along with Sandy Nelson.

Davey Anderson’s previous work as composer and music director includes: Life is a Dream (Lyceum Theatre), And I’ll Huff, The Gift and Family Portrait (Barrowland Ballet), Dublin Carol (Donmar Warehouse), Enquirer, Peter Pan, Be Near Me and Black Watch (National Theatre of Scotland). As a playwright, Davey wrote The Abode for Pepperdine, which premiered at the Edinburgh Fringe in 2018. The play has since been translated into Portuguese and performed in Brazil under the new title Freedom City. His other plays include Scavengers (Cia Artera), The Static (ThickSkin), Blackout (National Theatre Connections) and Snuff (The Arches). He was co-writer of Anything That Gives Off Light (The TEAM, National Theatre of Scotland) and First Snow / Première neige (NTS, Théâtre PÀP, Hotel Motel).

Pictures are free to use, credit Matthew Hamm. Artwork by Heather Tomlinson, Cake Graphic and Digital.