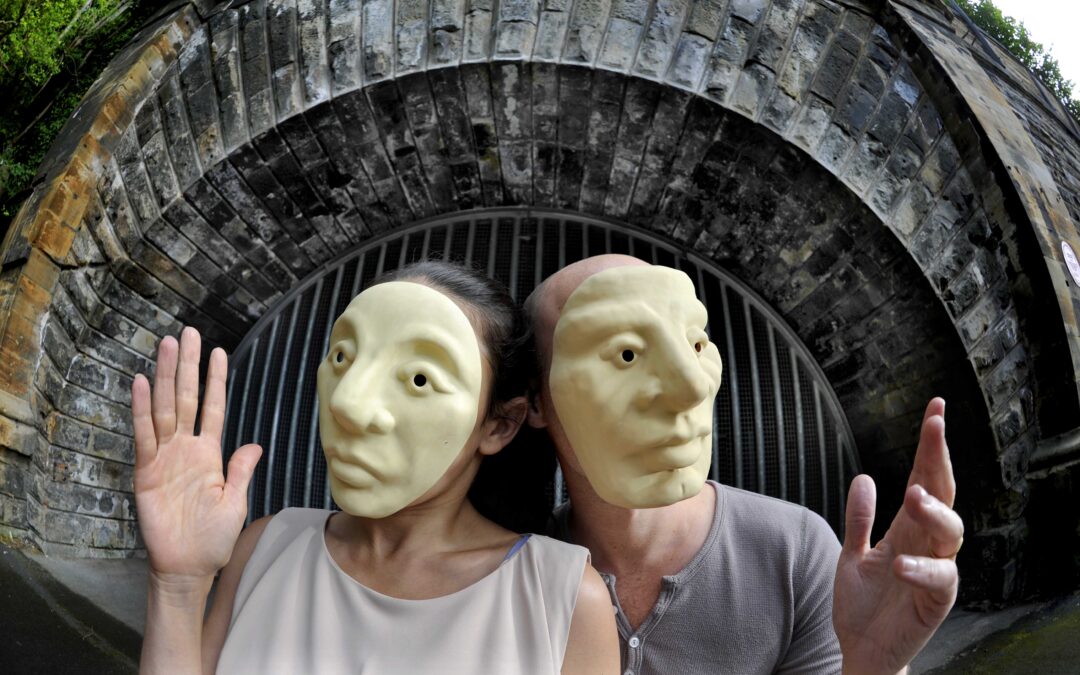 In their masks they take us back to the Trojan War, and the tragic fate of Mighty Hector and his wife Andromache

Unmasked they appear on stage as Bea and Alec – an Army officer’s wife facing the trauma of her husband’s declining mental health and the risk of death he faces in repeated tours of duty in Afghanistan.

In real life Genevieve Dunne and Jonathan D’Young are a married couple in the challenging situation of coming to Edinburgh Fringe from East Anglia and staging a show while also caring for their 9-month-old son Orien (and dog Suki).

Staged at part of Army@TheFringe, and running until 28 August, their show Tempus Fugit: Troy and Us digs deep into the myths and exposes the realities of conflict, putting women’s experience at the forefront.

Created by NMT Automatics, it combines mask work, dialogue and physical storytelling to look beyond the warzone to explore female courage and endurance.

The production has been praised as a “Truly an enactment of the phrase ‘Theatre of War’.” ★★★★ LondonTheatre1 and a “masterclass in text-based realism… physical storytelling and mask work” PocketsizedTheatre.

Its co-creators and performers Genevieve Dunne and Jonathan D’Young carried out interviews with military families in order to ensure its authenticity.

The result is a story that intertwines the ancient Greek tale of Hector and Andromache with that of Bea, a 21st-century British soldier’s wife and her husband Alec who struggles to re-assimilate after returning from Afghanistan.

Bea gets drawn into a radio adaptation of The Iliad. Mask work is used to present the fantasy relationship Bea develops with Hector, the ultimate hero, who stands in stark contrast with the demon-haunted Alec.

Genevieve said: “The show was originally supposed to come to the Fringe in 2020, but then COVID happened, and so now we’ve found ourselves here at long last but with the additional challenge of having a nine-month-old baby to think about.”

Jonathan added: “Putting on a show is always demanding, but having a young child adds a whole other dimension. There’s the childcare during performances and while we are putting on workshops.

“And then there’s the sleep deprivation that comes with having a very young child – which is something else to throw into the mix of tension, stress and high emotions involved in producing a show at the Fringe.

“Fortunately we have had a really good deal being part of Army@TheFringe and that has helped take some of the financial risk out of it – as a young family we can’t afford big risks. We have also had support from The Classical Association and have been doing workshops.

“So while we’ve been working on a very low budget we have been able to make sure that everyone is paid at full Equity rates.”

Tempus Fugit: Troy and Us was developed in collaboration with Dr Alice König, senior lecturer in the St Andrews University School of Classics, who runs the interdisciplinary Visualising War Project and has carried out extensive research into “how war stories work and what they do to us”.

The production was originally developed for The British Museum’s Troy Exhibition in 2020 in collaboration with Dr Jon Hesk of the The Centre for the Public Understanding of Greek & Roman Drama, based at St Andrews University, and Alice König and Nicolas Wiater’s Visualising War Project, as well as Army and the Arts, Trestle Theatre Company and The Redbridge Drama Centre. The project has also since been supported by Arts Council England.

Pictures are free to use, please credit NMT Automatics.

For media information contact Matthew Shelley at SFPR on 07786 704299 or at Matthew@ScottishfestivalsPR.org.