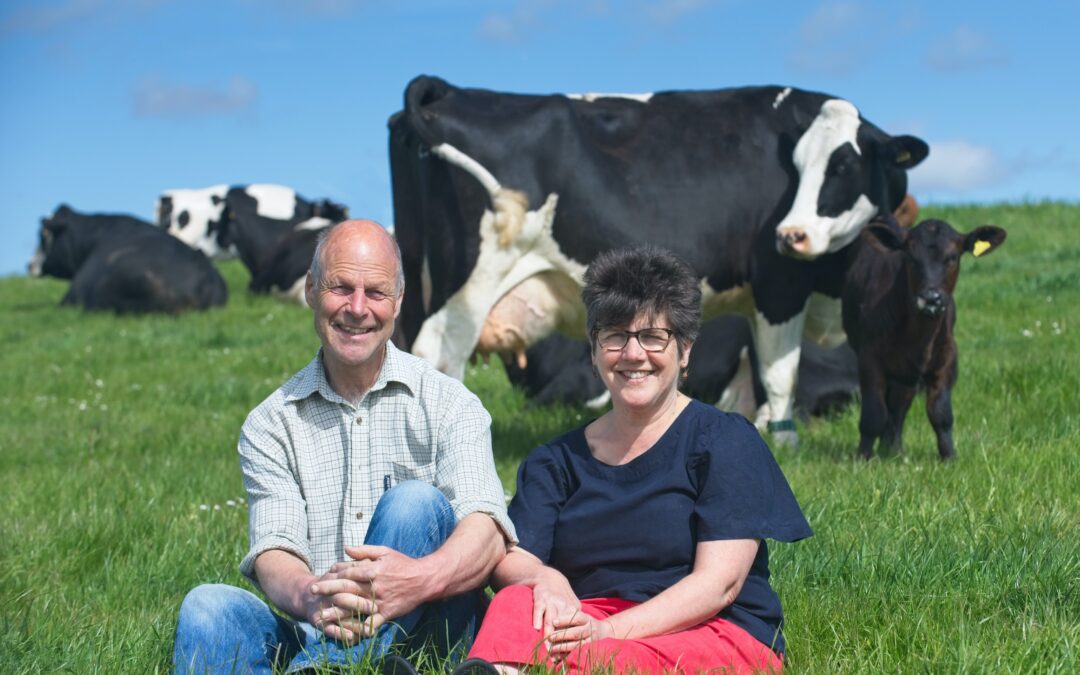 David and Wilma Finlay’s decades long work to make dairy farming kinder to cows and their calves took on a new urgency when Wilma was diagnosed with cancer.

Together they run The Ethical Dairy at Rainton Farm in south west Scotland and make the famous Cream o’ Galloway ice cream, and they’ll launch a memoir about their lives and their dedication to the environment and animal welfare at the Wigtown Book Festival.

A Dairy Story is the moving and inspirational account of the couple’s efforts to reinvent dairy farming, by designing an alternative to standard industry practice that sees dairy calves being forcibly separated from their mothers within 24 hours of birth. At the Finlay’s farm, the largest ‘cow-with-calf’ dairy in Europe, calves stay with their mum to suckle naturally.

The couple are also making a stand against the ever-increasing industrialisation of dairy farming, which sees cattle spend their entire lives in mega-sheds, rather than grazing in the UK’s wonderfully rich pastures.

Wilma is determined to tell the world about their pioneering and successful journey away from conventional farming to an organic, 100% pasture, regenerative, cow-with-calf dairy that’s now at the forefront of a global movement to transform an industry.

She says: “When I met David and moved to the farm I was deeply uncomfortable with removing calves from their mothers so soon after birth. Once we started providing farm tours it became clear that the general public didn’t like normal dairy industry practices either. We believed there must be a better way to do things, so we set out to find it.

“Over the past year we have seen a surge of interest in our system, and at the same time we have been confronted with the stark reality that none of us can take tomorrow for granted. So we are determined to make everything we know accessible to others.

“I can’t just sit in a corner moping about the hand I’ve been dealt.  For the sake of our planet farming needs to change, and it needs to change quickly. The most important thing we have learned is that change is possible, and that gives us hope.”

Finlays have farmed at Rainton, Gatehouse of Fleet, since the 1920s – and until the 1970s the farm was also well-known for its artisan cheesemaking. One of David and Wilma’s proudest achievements was the revival of traditional cheesemaking on the farm, and, in 2018, the launch their cheese brand, The Ethical Dairy.

At the heart of their business is an approach to dairy farming, developed over 25 years, that allows calves to stay with their mothers – meaning that Rainton Farm is free from the heart-rending bellowing of mothers when their newborns are taken away.

David said: “Our ethical dairy farming system isn’t just about letting calves stay with their mum, it’s about so much more than that. Our goal is the creation of a circular, regenerative food production system, fed by sunlight and rain, that has a positive environmental impact, delivers nutritious food, provides good quality jobs and works to the highest possible standards of animal welfare. It might not have been easy, but our farm is living proof that it can be done.

“Following a path of intensification has marched our whole industry into the crosshairs of an oncoming climate war. It’s a path I refuse to walk.”

A Dairy Story is a joint memoir that was completed in June of this year. Publication has been fast-tracked via a successful crowdfunding campaign after Wigtown Book Festival offered to host a launch event.

The couple, both aged 67, are well known in Galloway for their innovative approach to farm diversification, food production and tourism. The memoir charts the roller-coaster nature of their business journey, including the launch of Cream o’ Galloway and the trauma of the 2001 foot and mouth disease outbreak.

It explains why their initial pilot of cow-with-calf dairy nearly ended in bankruptcy and how they figured out how to make the system work, and it charts their personal journey – from dealing with recurring cancer, including her current treatment for Stage 4 lung cancer, to a joint awakening about climate and the environment.

Under these circumstances it is all the more remarkable that they chose to go against conventional wisdom and practice – risking everything to create a more natural approach to dairy farming, which initially saw yields and income plunge.

But theirs is a story of success and their practices are increasingly recognised as both economically and environmentally sustainable by academics, researchers and farmers around the world.

The publication of A Dairy Story is part of their wider drive to popularise ethical dairy farming, with hopes high that they will soon produce practical guides for other farmers wanting to follow in their footsteps.

Praise for A Dairy Story