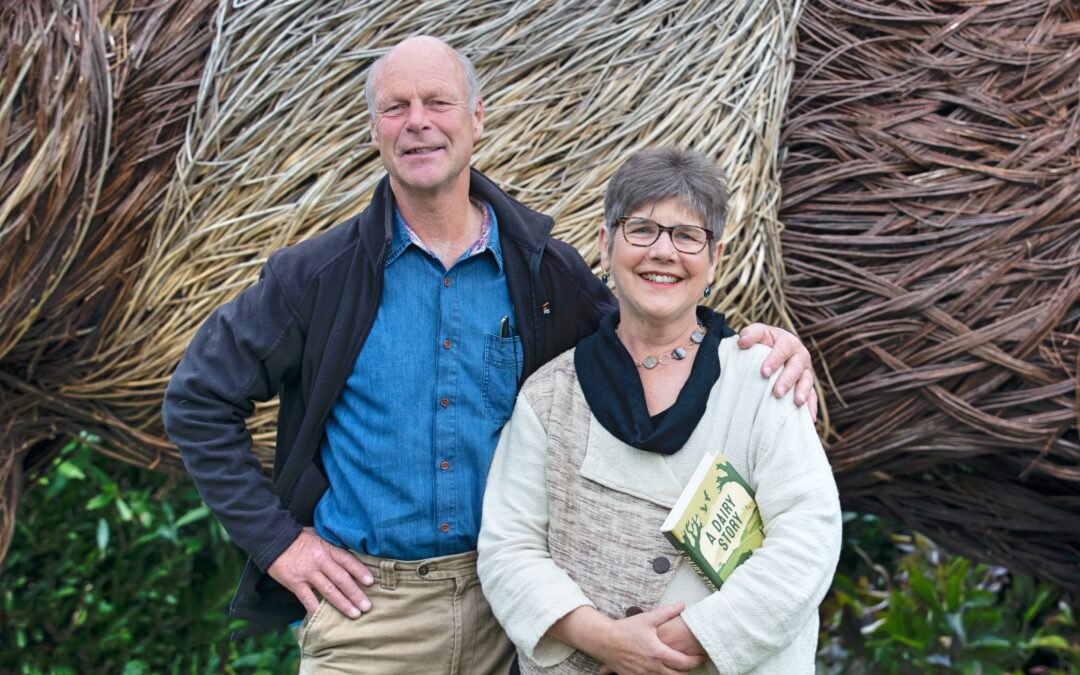 David and Wilma Finlay – whose Cream o’ Galloway ice cream is loved across the UK – yesterday launched A Dairy Story, a deeply personal memoir detailing their love, their lives and their campaign for a kinder form of dairy farming.

Appearing at Wigtown Book Festival, they discussed their success in creating a new farming system that works in harmony with nature and where calves remain with their mothers rather than being forced apart shortly after birth.

It has been an uphill struggle and one that Wilma has undertaken despite being diagnosed with breast cancer in her 30s, and with Stage 4 lung cancer last year.

The couple, who run The Ethical Dairy at Rainton Farm, near Gatehouse of Fleet, in south-west Scotland, believe that the time is right for others to adopt their approach – and their methods are already being studied and adopted in several European countries.

David said: “This nature based stuff does actually work, it can produce good quality food, it can be cost effective.”

He believes their cow-with-calf approach is also a way that family farms can differentiate themselves and gain a competitive edge – becoming known for high quality, eco-friendly produce.

Part of their approach has been to wean their land off pesticides and artificial fertilisers and to ensure that calves suckle their mother’s milk naturally. While other farmers have seen their costs rocket due to rising transport and chemicals prices, their own costs have fallen.

Indeed the amount of milk their cows produce has risen significantly and their calves are growing much faster.

David said: “We’re six years in now and we’re not going to go back because it’s working. It is working for us. These cows are performing well. The animals are healthy, it’s even better than we had hoped.”

The couple met in the early 90s and David rapidly realised that they were perfectly suited. On their third date he popped the all-important question “would you like to see my business plan?”.

Wilma consented and they haven’t looked back, becoming farming pioneers as well as successful makers of ice cream and cheese. This was all achieved despite the challenges of foot and mouth, of COVID and the many other challenges facing farming and society.

The lung cancer diagnosis has added a new urgency to their work but Wilma said: “I’m having chemo every three weeks and the tumour has shrunk, the specialist tells me that unfortunately they don’t ever go away, but it’s stable. I’m OK with that.”

The couple believe it’s essential to make a stand against the ever-increasing industrialisation of dairy farming, which sees cattle spend their entire lives in mega-sheds, rather than grazing in the UK’s wonderfully rich pastures.

Wilma is determined to tell the world about their journey away from conventional farming to an organic, 100% pasture, regenerative, cow-with-calf dairy.

Finlays have farmed at Rainton since the 1920s – and until the 1970s the farm was also well-known for its artisan cheesemaking. One of David and Wilma’s proudest achievements was the revival of traditional cheesemaking, and, in 2018, the launch their cheese brand, The Ethical Dairy.

Publication of A Dairy Story was fast-tracked via a successful crowdfunding campaign after Wigtown Book Festival offered to host a launch event.

The couple, both aged 67, are well known in Galloway for their innovative approach to farm diversification, food production and tourism.

The book explains why their initial pilot of cow-with-calf dairy nearly ended in bankruptcy and how they figured out how to make the system work.

Theirs is a story of success and their practices are increasingly recognised as both economically and environmentally sustainable by academics, researchers and farmers around the world.

The publication of A Dairy Story is part of their wider drive to popularise ethical dairy farming, with hopes high that they will soon produce practical guides for other farmers wanting to follow in their footsteps.

Praise for A Dairy Story