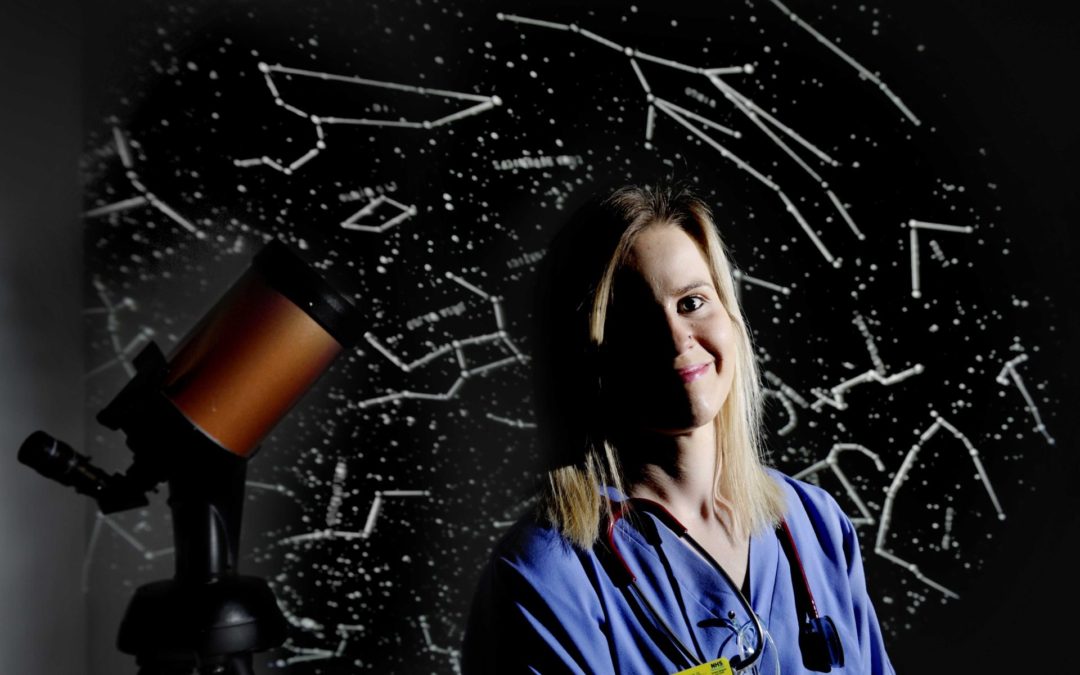 Dr Christina Mackaill’s regular job in a hospital A&E department is challenging enough – but when the scrubs come off her focus shifts to planning how to treat sick or injured astronauts.

The Edinburgh-born medic (pictured) is one of several guests at this year’s Big Bang festival of astronomy and science who are underlining that the days are vanishing when space exploration was the preserve of square-jawed male fighter pilots.

From 3-6 March the Wigtown Festival Company has a series of free, ticketed online events lined up which include the chance to meet 16-year-old Scottish astrophotographer Helena Cochrane and US space professional Kellie Gerardi, who has a personal mission to democratise space.

Dr Mackaill, who went to university in Glasgow and trained in Dundee, is working towards becoming one of the world’s tiny but growing band of space doctors and will specialise in emergency medicine.

Speaking ahead of her Big Bang appearance, called The Space Doctor Is In (on Friday, 5 March at 7.30pm), she said: “With Moon and Mars missions on the way and a burgeoning of space tourism coming soon we have to be able to deal with medical emergencies in space.

“There are no hospitals, no ambulances and will often be no doctors available. So one of the things we are looking at right now is how doctors need to respond if they are rushed into Mission Control and need to talk the crew of a spaceship through how to deal with something like a heart attack in microgravity.”

Dr Mackaill has already had a significant impact in the field, having authored two papers on extra-terrestrial CPR and co-developing “a gravity-defying method of cardiopulmonary resuscitation (CPR) for astronauts visiting the moon and one day Mars”.

She has ambitions to go into space herself and with the European Space Agency having just opened applications for new trainees, she will be among the candidates.

Dr Mackaill founded Scotland’s first space medicine society in 2016 and is currently collaborating with NASA on a paper about emergency medicine in space.

Kellie Gerardi hopes the new age of space travel will be open to all – and intends to lead the way. It’s something she will discuss in a Big Bang event called Not Necessarily Rocket Science on Wednesday, 3 March at 5pm.

She said: “It’s something I’ve been laying the groundwork for throughout my whole career. So for me it’s travelling to space is not a matter of if but when. But my real ambition is about democratising access to space and opening that final frontier for more people.

“In the early days it might have been that the steely-eyed test pilot was the ideal candidate for going into space but as spaceflight evolves, crew needs and candidate profiles will too.

“The first flights were about function, in the future it will be a lot more about experience. I look forward to the time when the poets, the artists, and the musicians, come back and share their experience with people on Earth.”

Gerardi’s sense of excitement and possibility is summed up by the fact that one of the first experiences she gave her newborn daughter, Delta V, was a trip to Cape Canaveral for the launch of a Falcon Heavy rocket.

She will also discuss her acclaimed book, also called Not Necessarily Rocket Science, is about her unconventional career in the space industry. Her lengthy Wikipedia entry lists a multitude of accomplishments, describing her as a commercial spaceflight industry professional and a veteran of the Mars Desert Research Station who has also taken part in space suit testing.

In 2018 she was named as a Scientist-Astronaut Candidate with Project PoSSUM (Polar Suborbital Science in the Upper Mesosphere), the first crewed suborbital spaceflight research programme.

Astrophotographer Helena Cochrane, who lives in Wigtown, will be taking part in a discussion with Abigail Beall, author The Art of Urban Astronomy: A Guide to Stargazing Wherever You Are in an event called Reach for the Stars on Saturday, 6 March at 5pm.

Cochrane has even set up a YouTube channel with thousands of followers which charted her progress from being an absolute beginner.

She said: “I love astrophotography and have met so many brilliant people through it, such as some truly inspirational women in STEM. It was something I really wanted to share so other people could be intrigued by it, and discover a love for the night sky as well.

“Taking deep space pictures is a challenging task and I soon realised that there wasn’t a lot out there for beginners to learn from. So, I decided to set up a YouTube channel so people could follow what it was like for me as I started to learn.”

And nowadays her results are so impressive that Big Bang is staging an online exhibition of some of Cochrane’s photography.

Dr Mackaill is a Clinical Fellow in Emergency Medicine in NHS Ayrshire & Arran. Part of an international team developing an Advanced Life Support Guideline for Microgravity, she founded Scotland’s first space medicine society in 2016 and is now on the medical team conducting a simulated astronaut mission in the Negev Desert.

She first got into Space Medicine when I was in her fourth year at university, doing a medical elective in Space Medicine at a Microgravity Lab in Brazil. She did a research project with Professor Thais Russomano, who is very well known in the space medicine community, about CPR in hypogravity (ie on the Moon and Mars!).

Dr Mackaill has presented about her research in Extraterrestrial CPR twice in America at the biggest aeromedical space conference in the world (called AsMA) to the likes of NASA, ESA etc. She has authored two papers about CPR in space. She recently spoke at the Aberdeen University Aviation and Space Medicine Society about Emergencies in Space. Dr Mackaill works closely with the space company Innovaspace and am part of the medical team for the Austrian Space Forum.

Other participants of Big Bang Week include:

Brian Clegg: The best-selling science writer discusses his book – What Do You Think You Are?: The Science of What Makes You You, following an extraordinary trail back from 21st-century humankind to our sub-atomic origins.

Nathan Case: One of the UK’s leading experts on the Northern Lights guides us through their causes, where to see them and how you can contribute to our understanding of the ever-surprising aurora. Dr Case is a Senior Research Associate in Space and Planetary Physics at Lancaster University, and a member of the AuroraWatch UK team.

Joe Zuntz: Most of our universe seems to be “dark”, which to an astronomer means not just black but invisible. What could be out there? And how do we know if we can’t observe it directly? A lecturer in astrophysics at the University of Edinburgh, based at the Royal Observatory, Dr Zuntz talks about how cosmologists are exploring the deeply strange Dark Sector.