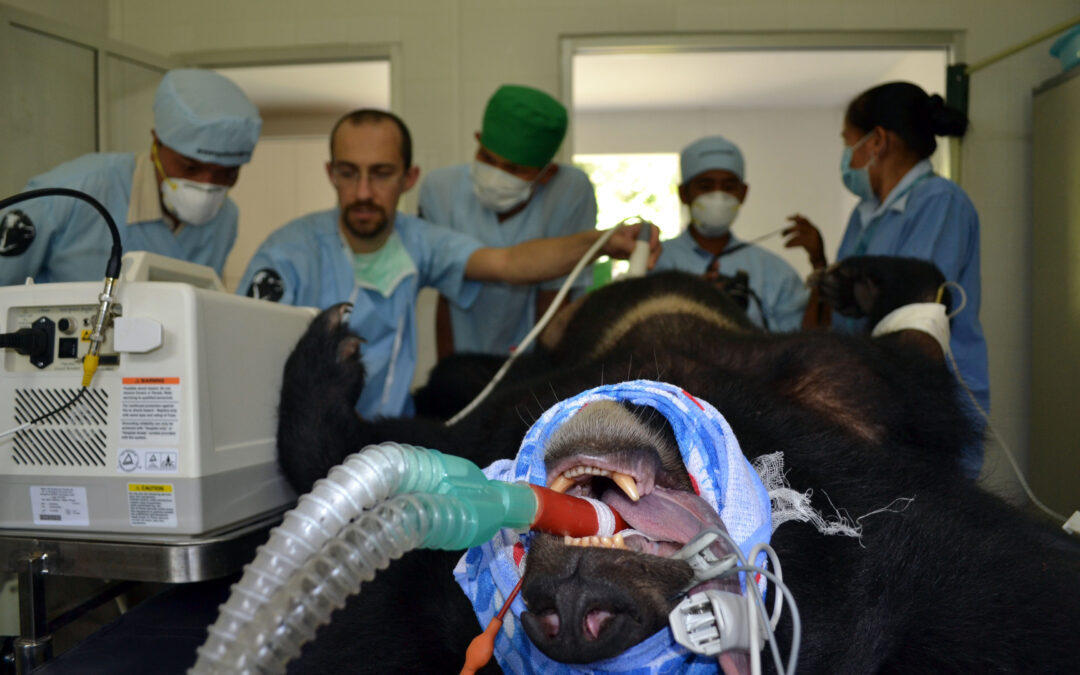 Any idea how to sex a beaver, or the role of hot water bottles in taking samples of their blood?

Since the reintroduction of these marvellous semi-aquatic mammals to Scotland, and elsewhere in the UK, these have become essential skills for Edinburgh-based exotic animal vet Dr Romain Pizzi.

This is someone who has enjoyed an astonishing career including several world firsts – the first man to perform brain surgery on a bear, keyhole surgery on an orangutan and a locking plate bone fracture repair on a chimpanzee.

Indeed he is recognised as the world’s leading expert in wildlife surgery.

Romain is one of the guests at this year’s Wigtown Book Festival where he will be talking about his work all across the world and his book Exotic Vetting in which he discusses the challenges of treating wild animals including giant pandas and tigers – even performing shark endoscopies.

Closer to home he has become involved with the programme to reintroduce beavers to Scotland’s rivers – and to rehome them, some in Scotland but mostly in England, when they are at risk of being shot.

He said: “Overall the reintroduction has been a real success and will bring lots of benefits. But when you reintroduce an animal that’s been extinct for over 100 years, especially one that modifies the landscape, there will inevitably be times when it leads to conflict between humans and beavers.

“I think, quite rightly, there’s been a perception that certain landowners have been a bit trigger happy. So one of the mitigation measures we have been taking is trapping beavers and relocating them as an alternative to people getting licences to shoot them.”

This involves checking they are healthy and also identifying what sex they are in order to set them up as breeding pairs in their new homes – something that’s tricky because their genitals are not visible.

Romain says: “We take blood from the tail, they have are big fat tails which they use in the water, but the blood vessels are really tiny. So what we do is put a hot water bottle on their tails so the blood vessels expand, which makes it easier to take the blood.

The reintroduction of beavers (which are sometimes blamed for eating fish despite being exclusively vegetarian) is helping restore biodiversity and also providing a natural way to combat flooding.

Romain is closely involved with charities and animal reserves on several continents, and does a great deal of work to train vets in other countries to treat wildlife.

One cause to which he’s committed is the rescue of sun and moon bears from bile farms in Laos, Vietnam and Cambodia where they suffer extreme pain and cruelty.

Bear bile is used in traditional medicine, despite having no real benefits, but is also added to foods and drinks as a bizarre status symbol.

Romain said: “Just this morning I had a call to say that two bears that were being illegally held had been rescued and were on their way to a sanctuary.

“Once there they will be assessed, go through a little bit of quarantine, and once we know they are safe we will try to reintroduce them to the wild.”

Some need treatment – including dentistry when the bile farmers have smashed their teeth – and others are simply too traumatised after years of being chained in tiny cages to live independently again.

This year’s festival (from 23 September to 2 October) is supported by EventScotland as part of Scotland’s Year of Stories 2022. Among the guests will be:

Tickets are now on sale for a festival in which books are just the beginning and where stories will be told in a multitude of forms – through theatre, music, art installations and lectures.

Romain was born and grew up in South Africa, where he qualified as a veterinary surgeon. He has been an honorary professor in zoo and wildlife medicine at the University of Nottingham for 15 years, and has taught and mentored wildlife veterinarians from around the globe. He was a specialist surgeons at the Royal Zoological Society of Scotland for a decade, provided the veterinary service at Scotland’s National Wildlife Rescue for 18 years and was previously the pathologist at the Zoological Society of London’s London Zoo. He has worked with conservation charities, wildlife rescue and rehabilitation centres, and zoos across the world in over 30 countries. His work has featured on TV on the BBC, Animal Planet, National Geographic, CNN and international print media.

Romain is currently the President of the British Veterinary Association (BVA) Scottish Branch, and President of the British Veterinary Zoological Society (BVZS), the specialist society for veterinarian caring for wildlife, zoo animals, and non-traditional companion animals. He is charity director of Wildlife Surgery International, a charity trustee of the Animal Welfare Foundation, and serves oo Defra’s Animal Welfare Committee. He lives in Scotland, with his specialist vet cardiologist wife and their two young children.