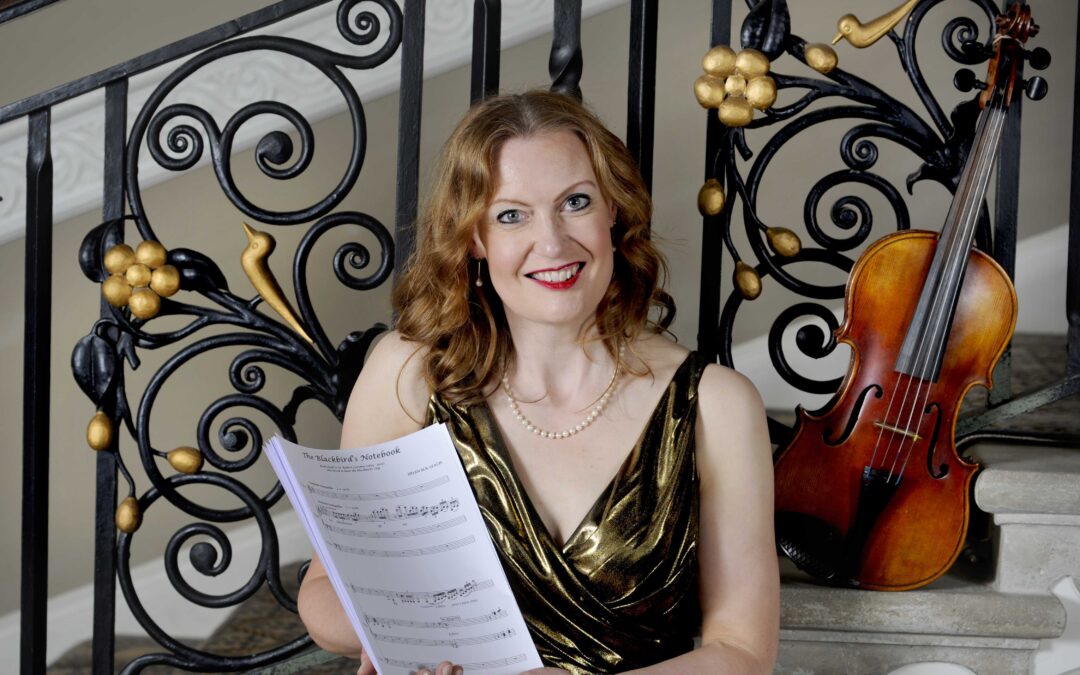 The birdsong of the Scottish Borders has inspired composer Helen Leach to create The Blackbird’s Notebook – a new work being premiered in one of the country’s loveliest historic music venues.

Helen created the piece, for the pleasing combination of violin and organ, during a week-long residency in The Tower Studio at Marchmont House near Greenlaw.

The stately home’s oak-panelled Lorimer-designed Music Room regularly welcomed the likes of Ralph Vaughan Williams and Sir Charles Villiers Stanford (who is thought to have helped design its organ) in the early part of the 20thcentury.

A delightful feature of the house is the ironwork of the staircase, which features highly stylised blackbirds by Lorimer to whom The Blackbird’s Notebook is dedicated.

The new compositions are part of a drive to return the house to being a centre for classical music in the Borders.

For May’s Marchmont residency she chose simply to write something inspired by the birdlife of the 1,500-acre Marchmont Estate, which has a number of projects to encourage native species.

She said: “One morning I got up very early and went down to a little bridge in the woods to just stand and listen, and I heard the blackbirds.

“They are so beautiful, so special, the sentinels of hope, wakening the world each day to the dawn. And then they fill our gardens with sound again at night – with a song of peace. It is the reiterated notes of the song of peace which undergirds the whole composition.

“It is not just the natural beauty of their song; I feel there is a spiritual significance. Nature can be a messenger for something else, and it’s this that I wanted to share with people.”

Born in Hawick, much of Helen’s early life was spent in The Borders. Latterly she lived in Manchester before returning in recent years with her husband Simon, who is the organist both at Canongate Kirk in Edinburgh and Marchmont.

The Blackbird’s Notebook will be performed by Simon along with violinist Benedict Holland at the Tea and Rhapsody event which takes place in the Music Room on Saturday, 30 July.

Helen’s work consists of nine songs or motifs with distinctive themes: hope, peace, freedom, resolution, soaring, courage, comfort, knowledge and creation.  Her song of freedom, in particular, has a pastoral quality giving it a “kinship” to the work of Vaughan Williams.

Helen has been asked to create two more works, which are likely to reflect the presence of the lapwing and the many owls on the estate.

Her residencies are being supported by The Marchmont Makers Foundation, a young charity dedicated to promoting and nurturing artistic excellence in the Borders and across Scotland.

Lucy Brown, the foundation’s Managing Director said: “Helen’s work exactly fits our aims to nurture and inspire creativity both local and at a national level by providing super-talented people with the opportunity to create new work.

“This is an utterly wonderful piece that’s joyful to hear. We are also very keen to have pieces that can be played on the organ at Marchmont and in its Music Room – that is what it was created for and we are determined to have it used.

“It is wonderful that new pieces are being created that can be heard in this place and will hopefully be enjoyed for hundreds of years into the future, just as the works of people like Stanford and Vaughan Williams that were created or played here in the past.”

The Tea and Rhapsody programme is:

Time and date: Saturday 30th July at 4:30pm – duration 50 minutes with no interval

Details from The Marchmont House Eventbrite page at marchmont.eventbrite.co.uk.