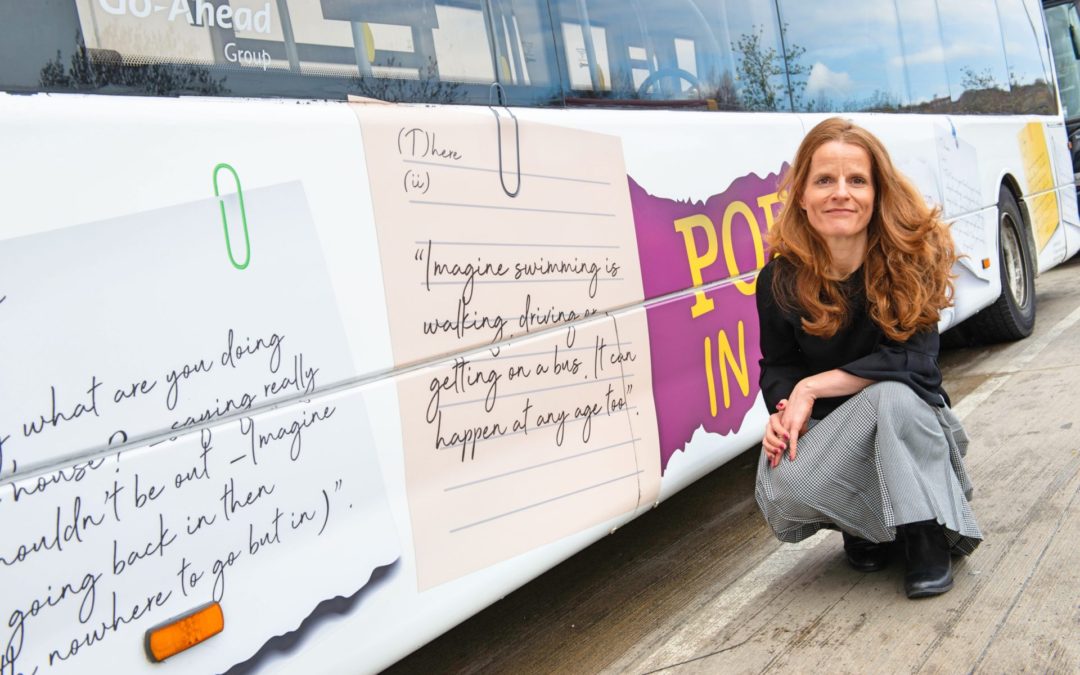 For the first time the results of Scotland’s international poetry prize – which celebrates the country’s three indigenous languages – will be revealed live to a worldwide audience.

The ceremony, on 4 October at 7.30pm, will be the finale for the Wigtown Book Festival, which has this year taken place online.

The £1,500 Wigtown Prize, which is open to entries in all three languages, has been awarded to Anna Woodford (pictured) for Portrait of My Grandparents as Souvenirs.

Woodford, who lives in Newcastle upon Tyne, said: “I’m delighted to have won the Wigtown Prize. My poem is concerned with my family history, specifically my grandfather’s experiences of having to flee wartime Poland to make a new life in Nottingham, and it is wonderful to have it recognised in this way.”

The runner up was Jane Frank, from Brisbane, Australia for Green Bathroom. She spent some years living in Dumfries and Galloway in the 1990s and is now Director of the Centre for Creative Industries at Griffith University.

Frank said: “This is very special to me because I am sentimental about the area which I got to know quite well over a number of years when I lived in Dumfriesshire. I’ve followed the development of Wigtown as a book town closely since I left, as part of a study on global book towns, so have made some trips back to south west Scotland in the intervening years.

“The Wigtown Poetry Prize has a growing reputation and I feel honoured to have had success this year. I also think it’s wonderful that there is a growing recognition of poetry in both Scots and Gaelic.”

Marjorie Lotfi Gill, who chairs the Wigtown Festival Company of Trustees, said: “Poetry has helped so many people through this pandemic, and we’re thrilled to be able to continue to support it in this region and beyond with the Wigtown Poetry Prize. We’re especially excited to announce our winners live at the online event on Sunday, something we’ve never done before, and bring a close to another terrific festival.”

The Wigtown Scottish Gaelic Prize Winner was Niall O’Gallagher for Penelope and the runner up was Morag Ann MacNeil for Ann an Oisean Cùbhraidh Gàrraidh. MacNeil lives on Barra and won the Highland Society of London Prize for fiction at the 2020 Gaelic Literature Awards.

She said: “I was honoured that my poem was shortlisted in such a prestigious competition, and I am truly delighted to have won a prize.”

Anne Frater, who judged the Gaelic prize, added: “It was pleasure to read the entries for this year’s Gaelic prize.  A pleasure, but also a challenge, given the high quality of the submissions given the wide range of topics and. It was difficult to come up with a shortlist, let alone a winner. I was looking for imagination, a confident voice, and, of course, good Gaelic, and all these qualities are to be found in the winning poem.”

The winner of the Scots prize was Robert Duncan, who lives in Newcastle, for A Drystane Dyke. He has spent time as a teacher in Glasgow and as a writer for theatre about Glasgow with Glasgow Citizens’ Theatre, and as a TV producer for many years.

Duncan said: “Everybody writing in Scots and Gaelic must be grateful to the Wigtown festival for the unique encouragement it gives with its annual competitions. A Drystane Dyke attempts to demonstrate that the Scots language is as important a part of what makes ‘Scotland’ as landscape or architecture. Winning the Wigtown Scots Poetry Competition is a great uplift.”

The runner up was poet, playwright and Scots language champion Wiliam Hershaw for Ainster Herbour, Hogmany. He is a previous winner of the James McCash Poetry Prize and The Callum MacDonald Award and is the founder of The Bowhill Players, a musical and dramatic group formed to perform and celebrate Fife’s coal mining culture.

Hershaw said: “I am pleased to be part of the Wigtown Book Festival’s efforts to promote the Scots Language and to include it and its speakers in their programme. At least 1.5 million people speak Scots. Scots is not a minority language in Scotland yet there is a historical reluctance to acknowledge this.”

Scots award judge George Watt said: “It was a great honour to be asked to judge the Wigtown Poetry Competition. This was something I had never done before and I really didn’t know what to expect. What did surprise me was the standard of poetry on offer.

“All entrants deserve to be congratulated. The subjects included were, cancer, Covid, dementia along with various social problems, indeed all aspects of life in Scotland and beyond. There was even a very fine love poem!

“However, I was asked for a short leet, and from that pick a winner and runner up. Not an easy task when my top six was really 27! I think six different judges would have chosen six different winners.

“My runner up was a lovely lyrical poem. A simple situation leading to some deep thoughts. Few words used to convey plenty, with some quiet humour included. I like the way the winning poem led you on the first couple of lines in one direction, only to suddenly pull you in another. Very good Scots throughout, with a good knowledge of the subject. A great deal is going on in this poem, and much left unsaid, for the reader to think on. Well done both poets.”

Claire Cox was awarded the Alastair Reid Pamphlet Prize, which recognises a collection of works, for A Book of Days.Born in Hong Kong, Claire now lives and works in North Oxfordshire and is associate editor for ignitionpress poetry pamphlet publishers.

She said: “I was stunned when I’d heard I’d won the Alastair Reid Pamphlet Prize. Being recognised by such a prestigious festival and getting my pamphlet set by Gerry Cambridge is a dream come true.”

The Dumfries and Galloway Fresh Voice Award, for poets living in, or from, the region who have never professionally published a full length collection, went to Peter Roberts for the Night Owling Collection. Roberts lives at Wallaceton, near Moniaive, and in 2015 led the community’s successful bid for a Creative Place Award.

He said: “I’m thrilled to have won this award and to discover that in my mid-60s I can still be a fresh voice. I may be a late starter, but I’m determined to take my writing life as far as I can.

“Family history and memory, and the passage of time, as well as the human place in nature, are important themes in my writing, and I think my life experience provides a powerful foundation for my work. The award gives me the first really solid ground to stand on as a writer, and the confidence to keep moving forward.”

The Wigtown Scottish Gaelic Prize is supported by the Gaelic Books Council. Its Director Alison Lang said: “The Gaelic Books Council applauds all the poets who submitted work this year. At such an uncertain time, it’s encouraging that their will to create is as strong as ever and that they continue to fly the flag for Gaelic poetry and the Wigtown Poetry Prize team deserve praise for keeping the competition going despite the current obstacles.

“Well done to Morag Ann MacNeil, Deborah Moffatt and Eoghan Stewart, whose poems were shortlisted, and congratulations to Niall O’Gallagher, who has won the Gaelic prize. Between Gaelic, Scots and English, it’s clear that Scottish poetry remains in rude health.”

Sarah Mason, Director of the Saltire Society, which sponsors the Scots prize, added: “We are delighted to be continuing our support of the Wigtown Scots Poetry Prize. The Saltire Society works to champion Scotland’s culture and languages and we are pleased to see Scots and Gaelic being recognised in this way. Congratulations to all the recipients and to the team at Wigtown Book Festival for keeping the celebrations going during difficult times.”

Creative Scotland is the public body that supports the arts, screen and creative industries across all parts of Scotland on behalf of everyone who lives, works or visits here. We enable people and organisations to work in and experience the arts, screen and creative industries in Scotland by helping others to develop great ideas and bring them to life.  We distribute funding provided by the Scottish Government and the National Lottery. For further information about Creative Scotland please visit www.creativescotland.com. Follow us @creativescots and www.facebook.com/CreativeScotland

Anna C Frater was brought up in the village of Upper Bayble in the Isle of Lewis, in a home and a community where Gaelic was the main language. After gaining an M.A.(Celtic and French) and then a PhD from Glasgow University, she worked in various roles in the media before returning to Lewis in 1999 to teach on the Gaelic-medium degrees at Lews Castle College UHI. Anne’s poetry reflects on the Gaelic language and community, as well as politics and more personal experiences. Her work has been published in various anthologies, as well as her own collections, Fon t-Slige (1995) and Cridhe Creige (2017).

Roseanne Watt is a poet, filmmaker and musician from Shetland. In 2018, her debut collection Moder Dy won the Edwin Morgan Poetry Award; Moder Dy was also nominated for the 2018 Saltire Society Poetry Book of the Year Award and the 2019 Highland Book Prize. Last year, Roseanne graduated with a PhD in creative writing and filmmaking from the University of Stirling.