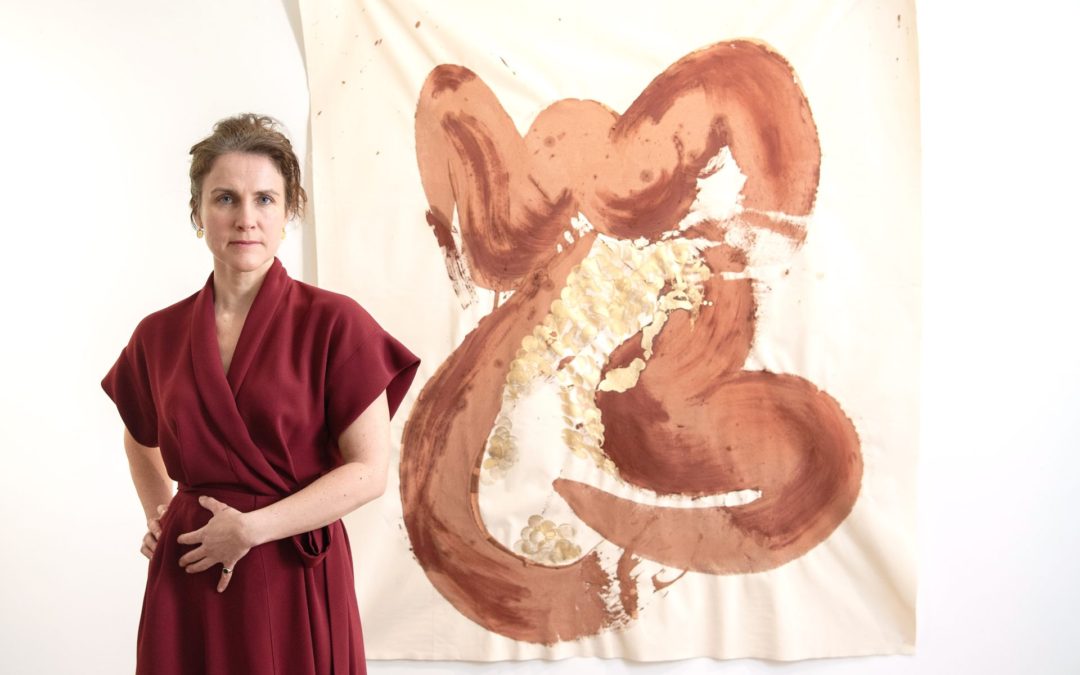 The rich red earth of the Marchmont Estate is being turned into paint for dramatic artworks exploring fertility and the female spirit.

The pieces are being created by Annabel Wightman (pictured above by Jennifer Charlton) one of the artists who have residencies in the Creative Spaces studios and workshops in specially-refurbished Victorian buildings in the grounds of Marchmont House, near Greenlaw, in the Scottish Borders.

Covid restrictions permitting, visitors will be able to meet Annabel and fellow artists including Endellion Lycett Green, during an open studios weekend on 8 and 9 May.

Both artists are based in The Marchmont Studios, the Upper and Lower Power House, which are part of Marchmont’s Arts & Crafts outbuildings designed by Sir Robert Lorimer.

Like Annabel, Endellion has been influenced by the park and farmlands round the 1750 Grade A listed Palladian mansion, and is developing a body of work inspired by its colours, landscapes and stonework. These will hang alongside a series of paintings of cornflowers which are proving popular with collectors.

Endellion, who has exhibited in venues such as The Lefevre and the Browse and Darby Gallery and whose work is on permanent display at Chatsworth House, came up from Wiltshire to spend up to nine months as part of the creative community at Marchmont.

She said: “I have been determined to use this time to discover something new and to create an entirely new body of work. The land and the landscapes are so rich and the night sky is so dark and clear compared with the south of England. The moon has become one of my motifs.

“It’s been very exciting to come here, and enormously creative. If anything I’ve been working too hard, collapsing into bed each night exhausted.

“The studios are fabulous, with so much space and light – and unlike so many studios they are warm too. Then there is the sense of communality that comes from living and working as part of a group of tremendously creative people.”

Annabel, who lives in London but whose father was from Perth, has welcomed the chance to return to Scotland. Before arriving at Marchmont, Annabel had been a personal chef. She has also worked at Dupplin Castle and more recently Skye’s Michelin starred Three Chimneys restaurant.

Soon after arriving she watched the land being worked and thought wanted to find a way to make it part of her art.

She said: “The soil around my studio is an incredibly rich red-brown, and I began collecting it to make my own paint, to create a series of works exploring ideas about fertility, the feminine and faith. The soil has hues of the Indian red, which I use to paint on top of the earth.

“My studio is situated neatly on a muddy track, it is a kind of heaven being surrounded by a paint material.”

There is a highly performative element to her work and some of the two-metre canvases she has created for her Muliebris Imago (image of woman) project show dancing figures that celebrates the female spirit.

Annabel said: “I have been reading about the life of Hildegard Von Bingen. As a girl of eight she was offered into the church and committed to years in silence.

“From an early age Hildegard is described to have received visions, many describing the identity of women. Hildegard’s story runs parallel to the present-day experience and how we are learning to live during this time – in a period of confinement.”

In collaboration with photographer Jennifer Charlton, Annabel hopes the Muliebris Imago project will result in an art book. She intends to have full-scale paintings as well as smaller works and sketches on show at the open studios in May.

She said: “I started out my creative life as an actress and performer.  However, after being accepted into the Royal College of Art my creative arena completely opened up, I saw fashion, performance and photography as a whole new language just waiting to be explored.

“Coming to Marchmont has been amazing – it’s the first time I’ve had the space to stretch out and work at scale.”

Hugo Burge, Marchmont Director, said: “We are delighted that Endellion and Annabel have joined us at the Marchmont Studios; a welcome addition to our nascent creative community.

“It has been heart-warming to be able to push forward with the first phase of our Creative Spaces project during this challenging year. We are now looking forward to the next phase of developments and are working with a variety of arts organisations to offer a programme of supported residencies for visiting artists.

“And most of all we look forward to the time when we can welcome visitors and guests in search of creative inspiration back to Marchmont.”