Praise Your Friends, Attack Your Enemies and Never Let the Truth Get in the Way 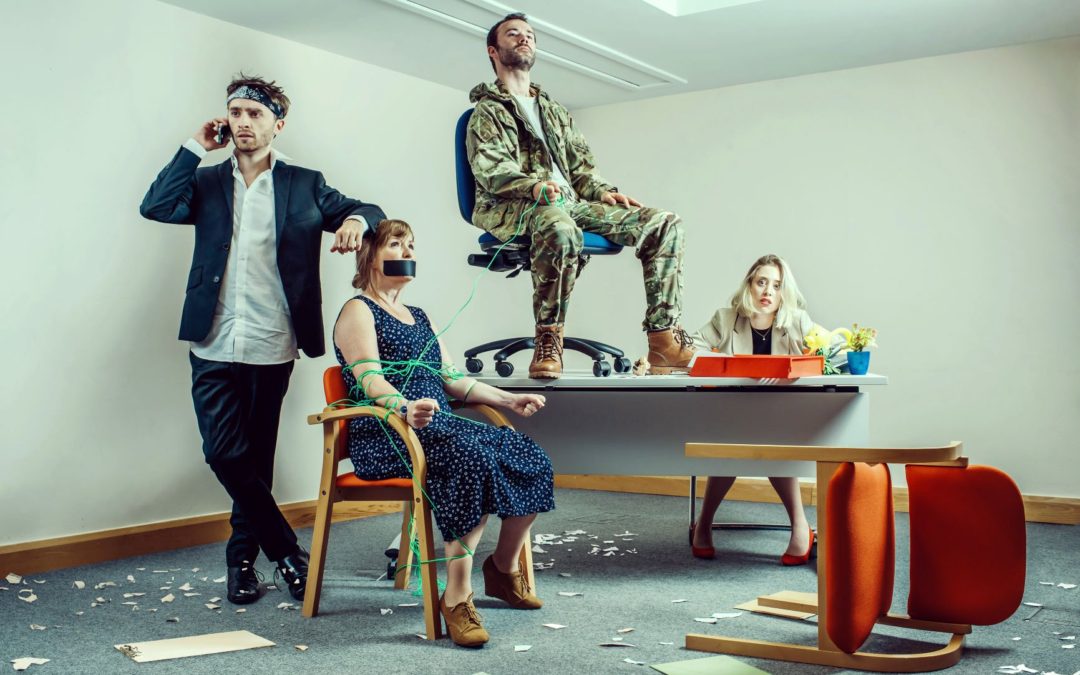 A young, ambitious, unprincipled politician seeks to gain power by taking control of a campaign to stop a small village becoming part of a big city – what could possibly go wrong?

Stirring up local feeling by creating fear and panic Antonia Morgan is a little too successful in convincing voters of the threats to their community. A tidal wave of twisted nationalism is unleashed as the previously apathetic Brian Barber takes her message to heart and rallies his friends to fight for the cause (see picture).

A Beginner’s Guide to Populism has just completed a short run at the Buxton Festival Fringe where it received excellent reviews and was nominated for the New Writing award. Ian Hamilton described it as “a thoroughly entertaining play, brilliantly executed and cleverly written by a team who plainly have an eye for the socio-political zeitgeist”(full review here), and Fringe Guru said it “lampoons populism and its insular message with great verve, but without offering simple solutions”★★★★(review here).

Presented by NoLogoProductions, it arrives at The Edinburgh Festival Fringe at the same time as a similarly dark comic political folly is being played out in the UK and provides a timely warning of the consequences of using of populist tactics to win support.

Edinburgh-based playwright Andy Moseley has drawn on his experience as a policy adviser at the Ministry of Justice during the coalition government in creating the play. The production is given added authenticity with the inclusion of lines taken from letters and statements made by MPs during Brexit debates in 2017. By paraphrasing these and putting them into the mouths of very different characters, the play shows the worryingly thin line between political speech and the politics of hate.

Moseley says “The play begins as a comedy, because the likes of Trump and Johnson began as comedy figures. It ends in a darker place, because we shouldn’t be laughing at them now.”

“The populist mantra can be summarised as ‘praise your friends, attack your enemies and never let the truth get in the way of your message’. Even if we defeat the politicians that employ these tactics, their messages and their supporters remain. We need to understand how we reached this position, and where we could be heading if we don’t manage to stop the spread of this brand of toxic politics.”

A Beginner’s Guide to Populismhad sell-out shows at The Cockpit in London, where it premiered in the 2017 as part of the Voila! Europe Festival. London Theatre1said: “Andy Moseley skewers everything that’s troubling about politics today” ★★★★.

The play is directed by David Wood and the cast includes Isabel Palmstierna as Antonia Morgan and Chris Townsend as Brian Barber alongside Will Underwood and Beag Horn.