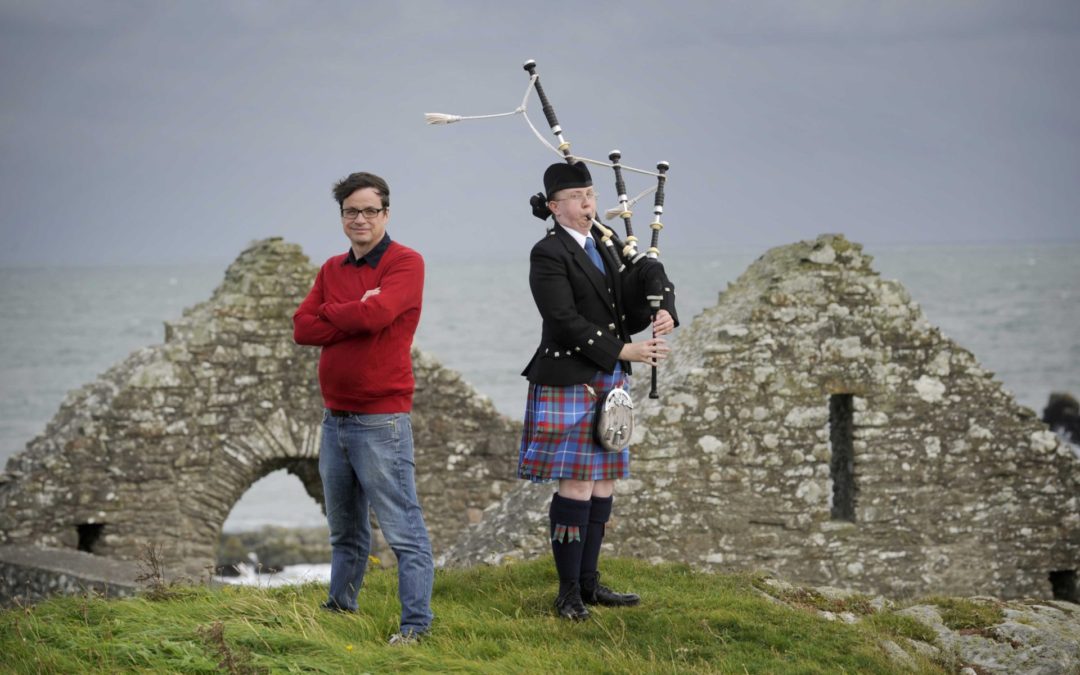 This year’s festival gets underway tomorrow and offers 10-days of colourful online experiences that include conversations with leading authors, plus music, readings, poetry, film and even a whisky tasting.

A highlight will be the performance introduced by Alexander McCall Smith and composer Tom Cunningham of Ninian’s Gift, which is performed a cappella by four singers, and tells stories of early saints including Ninian, Mungo, Margaret and Columba. The author and composer will also take part in a live video discussion afterwards.

McCall Smith has always been intrigued by the heroic and sometimes strange stories of the deeds of saints like Ninian, who was reputed to have come to the area on a mission to convert the pagan Picts.

He said: “I have wanted to write something about the early saints for a long time. I have always been intrigued by the stories of these people who came here when Scotland was a dark and dangerous place, and who had the idea of spreading a message of light, love, kindness and forgiveness.

“If you were at the bottom of the social pile in those days, in a land dominated by warlords, this must have been a wonderful message to hear.”

The work is the latest in a long line of collaborations in which McCall Smith has provided the words and Cunningham has created the music.

Ninian’s Gift presented particular challenges as Covid-19 restrictions meant each of the singers had to record separately and there was no option for musical accompaniment. However, both its creators are delighted with the results.

McCall Smith said: “I really enjoy working with Tom and he has done a fantastic job – the singing is beautiful and there is such a warmth to the music.”

Cunningham, who is based in Edinburgh and whose recordings include The Okavango Macbeth, added that he loved the idea of collaborating on a work about Scottish saints from the moment it was first suggested.

He said: “I was born and brought up in Scotland and am a highly patriotic Scot. So anything that gives me the chance to celebrate the wonders of this country interests me greatly.”

Wigtown Book Festival’s launch is normally celebrated with a party and fireworks – this year it will have a very different tone, with a lone piper standing close to where the main festival marquee normally stands – her music being streamed to audiences round the world.

The first day also features Wigtown’s own Sunday Times bestselling author Shaun Bythell, known for his wry humour, who is talking about his latest work Seven Kinds of People You Find in Bookshops. This follows on from his much loved Diary of a Bookseller and Confessions of a Bookseller.

Adrian Turpin, Wigtown Book Festival artistic director, said: “This history of St Ninian is written into the landscape in Wigtownshire. We’re thrilled to be given the first airing to a remarkable and moving piece of music that is both intensely local and universal in its appeal.

“This festival usually brings thousands of visitors to Wigtown. Clearly we can’t do that at the moment but we aim to fly the flag for Scotland’s Book Town, its businesses and its region across the world. The lone piper – replacing previous years’ pipe band – marks the way in which all our lives have changed in 2020. But above all its a symbol of resilience – the show will go on and we aim to make it as engaging, challenging and uplifting as ever.”

First Minister Nicola Sturgeon sent her best wishes for the festival Tweeting: “Good luck to the brilliant @WigtownBookFest – this year’s festival may be a bit different but I’m sure it will be every bit as good as usual.”

Alexander McCall Smith has two new books – Tiny Tales (Polygon) and How to Raise an Elephant (Little, Brown) – both are available now.

The music director is Michael Harris

EventScotland is a team within VisitScotland’s Events Directorate, the national tourism organisation which markets Scotland as a tourism destination across the world, gives support to the tourism industry and brings sustainable tourism growth to Scotland. For more information about VisitScotland see www.visitscotland.org or for consumer information on Scotland as a visitor destination see www.visitscotland.com.

Creative Scotland is the public body that supports the arts, screen and creative industries across all parts of Scotland on behalf of everyone who lives, works or visits here.  We enable people and organisations to work in and experience the arts, screen and creative industries in Scotland by helping others to develop great ideas and bring them to life.  We distribute funding provided by the Scottish Government and the National Lottery. For further information about Creative Scotland please visit www.creativescotland.com.  Follow us @creativescots and www.facebook.com/CreativeScotland.