Head of the Army in Scotland Praises the Skill, Talent and Determination of Fringe Performers 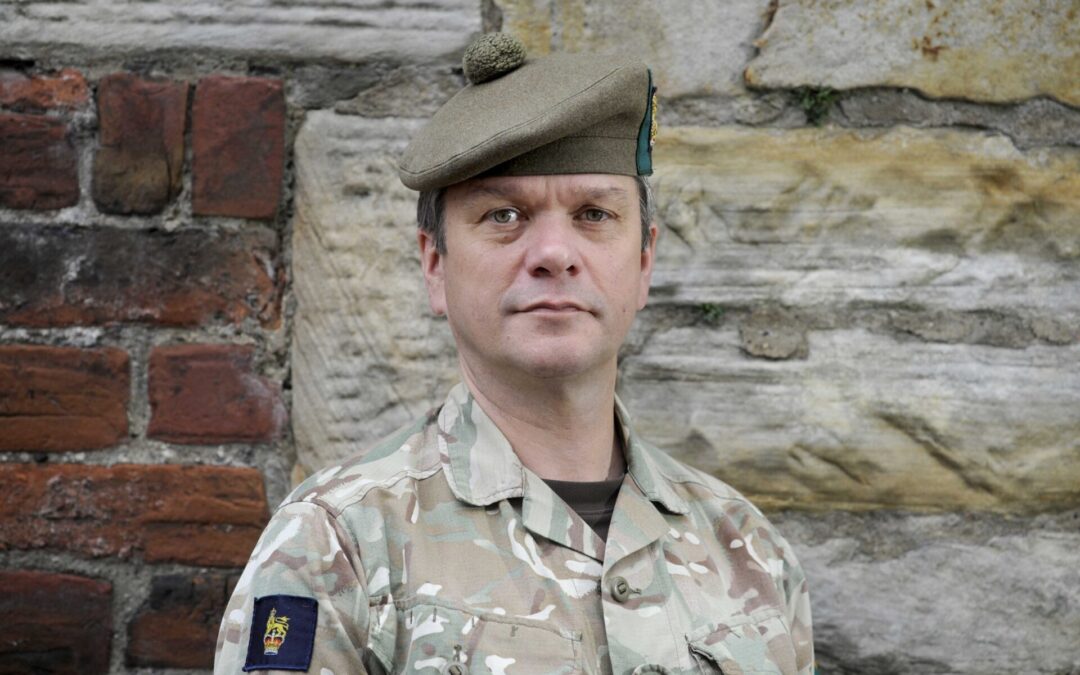 As Army@TheFringe 2021 enters its final week, the head of the Army in Scotland has thanked performers and spoken of his own love of the performing arts.

As a student at Edinburgh University in the early 1990s, Brigadier Ben Wrench, was a member of the Savoy Opera Group.

At one point he was the male lead in a production of Gilbert and Sullivan’s The Sorcerer, on another occasion he helped with set design and building for a show it performed at the Edinburgh Fringe.

This year has seen Brigadier Wrench renew his links to the performing arts, and the Fringe, as Commander 51st Infantry Brigade, Headquarters Scotland, which is in charge of the Army’s own venue – Army@TheFringe.

He said: “While I was studying at Edinburgh University I was part of the Savoy Opera Group, performing and working backstage – it gave me a real insight into the sheer skill, talent and determination that are needed in the performing arts. And that’s something we’ve seen so much at this year’s Fringe.

“It’s been so impressive to see what the performers, and the backstage teams, have achieved at Army@TheFringe. Making a return to the stage after so long in lockdown is very demanding.

“The Fringe is world renowned, so, after the year we’ve all had I am pleased that the Army has been making a small contribution to helping the performing arts, and the Fringe, to recover.

“As society looks to returning to some sort of normality it’s been important to me personally and as a public servant that we are doing something that supports the cultural life of the city and the country.

“Edinburgh is such a cultural capital and the Fringe is so much part of that. It has always been such a breeding ground of great talent. So many people have cut their teeth here.

“One of the things that Army@TheFringe is doing is nurturing emerging talent. It would be wonderful if in years to come we were remembered as having helped people get their careers underway.”

Army@TheFringe has been taking place since 2017 and specialises in hosting bold, high-quality and independently produced plays and other work about issues facing society and life in and out of uniform.

Army@TheFringe 2021 will end on 22 August and during its final week has two new shows, Tickbox from actor and comedian Lubna Kerr and Punch, with Johnny – a play about Gorbals boxer Benny Lynch and safe cracker Johnny Ramensky.

The Army pulled out all the stops to ensure that this year’s event could take place as part of its commitment to support the Fringe and the performing arts. It offered an exciting programme that put a particular emphasis on new writing and on providing opportunities for performers from Edinburgh – including through its two Live @ The Drill Hall variety nights.

The East Claremont Street venue in Edinburgh’s New Town has been configured with a computer-modelled ventilation system, a covered outdoors reception area with sanitisation stations, socially-distanced seating with reduced numbers and one-way traffic flow, a track and trace system, and an intensive cleaning programme between performances.

As well as working backstage, serving personnel have been trained to safely conduct all the front of house audience interaction for the event.

Commissioned into The Black Watch (Royal Highland Regiment) in 1994 after completing a four-year Master of Arts degree in Religious Studies at TheUniversity of Edinburgh. Following the Infantry structural changes in 2006 he served in the Royal Regiment of Scotland.

Brigadier Wrench has served in Scotland, England, Northern Ireland, Germany, Canada, Kenya and Hong Kong and commanded on operations in West Belfast, Kosovo, Iraq (TELIC 9) and Afghanistan.  He commanded 1 SCOTS, then based in Edinburgh, from 2010-2013, which included an operational tour in Afghanistan, Helmand Province (HERRICK 17) in 2012/13.

On the staff, he has served in the Ministry of Defence’s Army Resources and Plans Directorate (now part of Financial and Military Capability), and in the Headquarters Land Forces as Military Assistant to Chief of Staff Land Forces.  On promotion to Lieutenant Colonel in 2009, he worked for Director Land Warfare and established the Army’s Lessons Exploitation Centre (LXC).  On promotion to Colonel in 2013 he was posted to the Army Headquarters as Assistant Head Collective Training in the Army’s Directorate of Training.  This was followed with a one-year assignment as Assistant Head Army Reform, a small transformational branch working closely with the Army’s strategic partnership consultants.  In 2017 he was promoted to Brigadier and became The Army Inspector, reporting directly to the Chief of the General Staff and acting as a ‘conscience’ to the Army.  A privileged position to hold.

In November 2019 he was appointed Deputy Colonel, The Royal Regiment of Scotland and Honorary Colonel, City of Edinburgh Universities Officers’ Training Corps. Something he is very proud of having been a previous Officer Cadet and Territorial Commissioned Second Lieutenant in Edinburgh.

In May 2021 Brigadier Wrench assumed the appointment of Commander 51st Infantry Brigade, Headquarters Scotland and Joint Military Command (Scotland).  He has now commanded in Scotland as a platoon, company, battalion and brigade commander.

Tickbox – Lubna Kerr: A one woman storytelling show about identity from comedian and actress Lubna Kerr. Inspired by her parents journey from Pakistan to Scotland in the late 1960s, when her father came to do a PhD in Chemistry, the show explores Lubna’s mum’s life intertwined with her own growing up in Scotland. 17-22 Aug, 1800.

Punch, with Johnny – The Arts Enigma: The story of two unlikely heroes from the slums of The Gorbals. Two “hard men” – both outcasts, winning the war and losing their freedom in the process … blow, by blow … Benny Lynch, World Flyweight Boxing Champion and “Gentleman” Johnny Ramensky, the infamous safe blower, meet in a prison cell. Benny – drunk and disorderly and detained for breach of the peace. Johnny – detained for burglary and breaking in. Two “Champions of the People” at war in life and love – both in search of victory, vindication and peace of mind when they confront their enemies … themselves. 20-22 Aug, 1400.

The Trick That Fooled – Kevin Quantum: A magic show inspired by tricks that fooled the smartest and most creative people ever to have lived. Exploring themes of wonder and escapism, the show travels back in time and experience recreating tricks that fooled Einstein, Abraham Lincoln, Marie Curie and others. The show culminates with the trick that fooled the Nazis, when British magician Maskeleyne assisted the British forces to fool German commander Rommel during WW2 – apparently conjuring a tank battalion from thin air. 6-8 Aug, 1800; 10-22 Aug (not Mondays), 2015.

Tunnels – Further Theatre: A new play about two cousins attempting to tunnel their way to freedom at the height of the Cold War in East Germany. Based on accounts of escape stories from the Eastern Bloc, the play deals with life in a surveillance state. Featuring live music with some performances streamed from Hepburn House’s rifle range. Supported by Queen’s Theatre, Hornchurch. 6-22 Aug (not Mondays), 1600.

Duty Tour – They Eat Culture: Re-imagine the New Town’s East Claremont Street as a front line, where the military world meets the civilian, shaped through the eyes, ear and experiences of an army reservist as she returns to Hepburn House HQ and the city streets she loves. This is an experimental, rapid-response new-writing audio performance, exploring moments of exchange, opportunity and understandings when different characters, identities and duties collide.

Now Ended: The Mind Is The Frontline – Rosie Kay: A series of conversations hosted by Rosie Kay (founder and artistic director of the Rosie Kay Dance Company) bringing together artists, thinkers, writers and academics along with experts from the military and security as well as young people in cyber security. These events provide a platform to think, talk and question where we are now, what value we place on our so called ‘civilisation’ and where we are going in the future. Following on from her series of podcasts, The Future Proof Artist, these talks are for the curious and the questioning. 10-11 Aug, various times.

Now Ended: Live @ The Drill Hall: A series of variety events hosted by Mark McKenzie, featuring an Army musician house band and a rotating line-up of comedy, theatre and provocation. Taking place across the launch weekend of the festival, Live @ The Drill Hall offers an evening of variety to celebrate the return of live entertainment. 6-7 Aug, 2015.

Now Ended: Dandelion – Creative Electric: In the centre of a busy city is a garden utopia. A small safe haven from missed connections and digital overload. A place to clear your thoughts, relax your mind and meet with those you’ve missed. The British Army currently have no record of how many forces children there are in the UK. A study found that 98% of forces children could not answer the question “where is home?” Dandelion explores separation anxiety through autonomous sensory meridian response and immersive theatre techniques to ask why in a digitally connected world we are more anxious than ever? 10-15 Aug, 1600 & 1800.

For media information about Army@TheFringe contact Matthew Shelley at SFPR on 07786704299 or Matthew@ScottishFestivalsPR.Org.