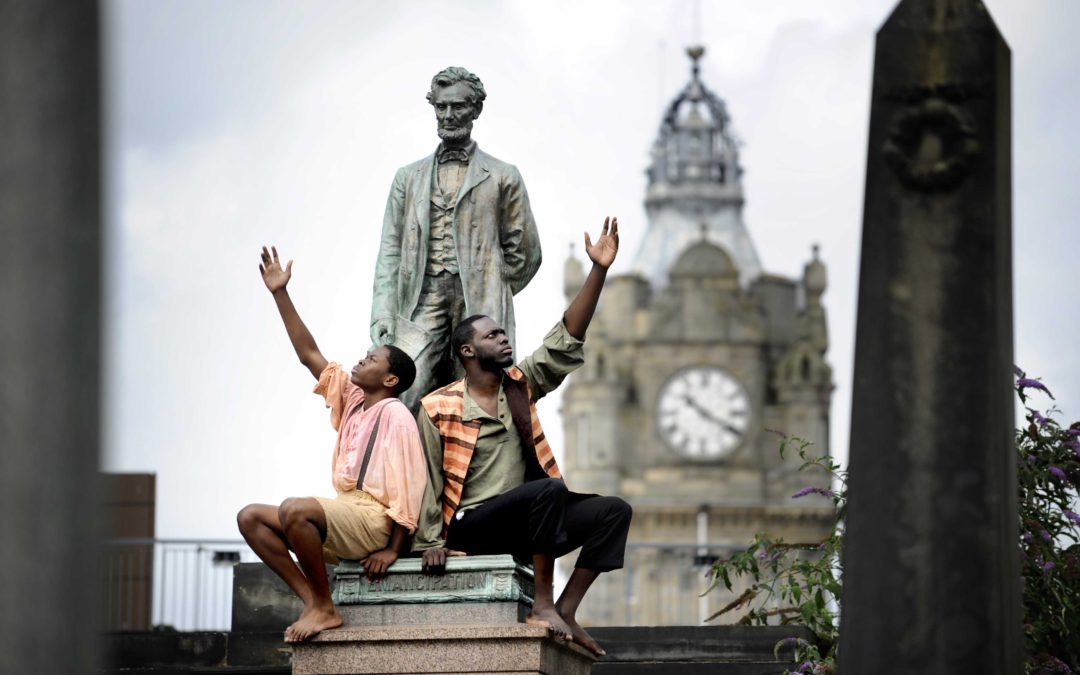 New York Gospel singers and Broadway actors from a new Edinburgh Fringe musical gathered and sang Amazing Gracein tribute to the Scots who fought against slavery in the American Civil War.

Henry Box Brown is a musical based on the true-life story of an American slave who shipped himself hundreds of miles to freedom concealed in a small wooden box just 3ft by 2ft.

Some of the cast are themselves the descendants of African American slaves. While in Edinburgh, they are keen to discover more about Scotland and the rest of the UK’s, links to slavery and its abolition.

They came to see the memorial in Old Calton Burial Ground, with its statue of President Abraham Lincoln and a freed slave, which is dedicated to Scots who fought and died on the Union side.

Ben Harney, the show’s Director,said: “While here in Scotland we very much wanted to show our appreciation for all those Scots who struggled so hard for the abolition of slavery here, in the rest of Britain, and in America.

“I’ve learned that some campaigned socially and politically, some through the courts and there were even those who fought on the Union side in the American Civil War. They struggled against huge and powerful vested interests, who were making vast profits from the misery of others.

“This was the spirit of Henry Box Brown himself, who believed we could be free of the bondage and the stain of slavery.

“And we are also delighted to be following in his footsteps because Brown escaped continued persecution in the USA and came to Britain where he spent many years raising awareness of the evils of slavery.”

About the real Henry Box Brown

Born into slavery in Louisa County, Brown worked in a Richmond tobacco factory. In 1848 his children and pregnant wife were sold to new owners in North Carolina. Brown resolved to escape slavery and enlisted the help of a white churchman and a slave-owning gambler. In later life Brown became a prominent abolitionist, a performer, musician and a published author.

Itis Les Miserablesset in the American south, but the good guys are not so obvious. The show is driven by original songs blending gospel, R&B, bluegrass as well as ‘a capella’ original negro spirituals. It’s a crowd-pleaser that shines a light on the human ability to transcend.

It is also something very rare indeed – a musical with an African American here. While US history is rich with inspiring African American stories, few make it to the stage. After 19 years of working in NYC public schools in deprived areas, and creating theatre for African American audiences, Mehr decided the time had come to change this.

Praise for the musical

Free to use pictures are available – they are being distributed to news and picture desks but you can also request them from Matthew Shelley at Matthew@ScottishFestivalsPR.Orgor on 07786704299. You can also contact Matthew for interviews or review tickets. Pictures are by Colin Hattersley.

CTC’s Artistic Director, Mehr Mansuri, an Iranian born, British schooled, American citizen. Mansuri, who escaped her native Iran due to the regime’s persecution of the Baha’i Community (Iran’s largest non-Islamic, religious minority), was in search of building a social-change theater that had a social-justice imperative at its core. Inspired by Bertolt Brecht’s epic theater, the Iranian born, British schooled, American citizen (Mansuri) eventually founded the Children’s Theater Company in NYC in 1999 and the professional adult ensemble- the CTC New York Ensemble, with a mission to explore the power of theatre as a tool for moral reasoning. CTC brings together her roles as an educator, storyteller, community builder and human rights activist.

She wrote and co-composed the book and songs with co-composer, Frank Sanchez, with score by Oscar winner, Jack Lenz. The production won a “space grant” at the prized Dizzy Gillespie Theater in the heart of Greenwich Village, NYC and was co- presented by the New York Baha’i Unity Center – in association with New York University Office of Community Affairs and in partnership with International film star / comedian, Omid Djalili. In collaboration with Tony winner, Ben Harney and three time Tony winner, Hinton Battle, the consulting team was also able to bring to light the rich contribution of Negro spirituals- which permeates the musical, and ultimately give homage to the musical contributions of the early African Americans to the world of music. Additional music and lyrics was written by Gospel Music Director and African American historian ERIC DOZIER; composer, SAM URDANG.

CTC NEW YORK ENSEMBLE has a SOCIAL JUSTICE IMPERATIVE at its core. By developing musicals that cultivate an understanding of the personal and cultural forces that shape society, CTC’s original musicals explore the theatre’s power to impact diversity, to develop empathy and compassion for the human condition, and to allow us to learn from lives we’ve never lived.

The musical is championed by the Baha’i Unity Center and New York University’s Office of Governance and Community Affairs. It has grown into a thrilling a 16-person production with fabulous singers from New York’s Christian Cultural Center where it had a brief run which attracted praise from many quarters.