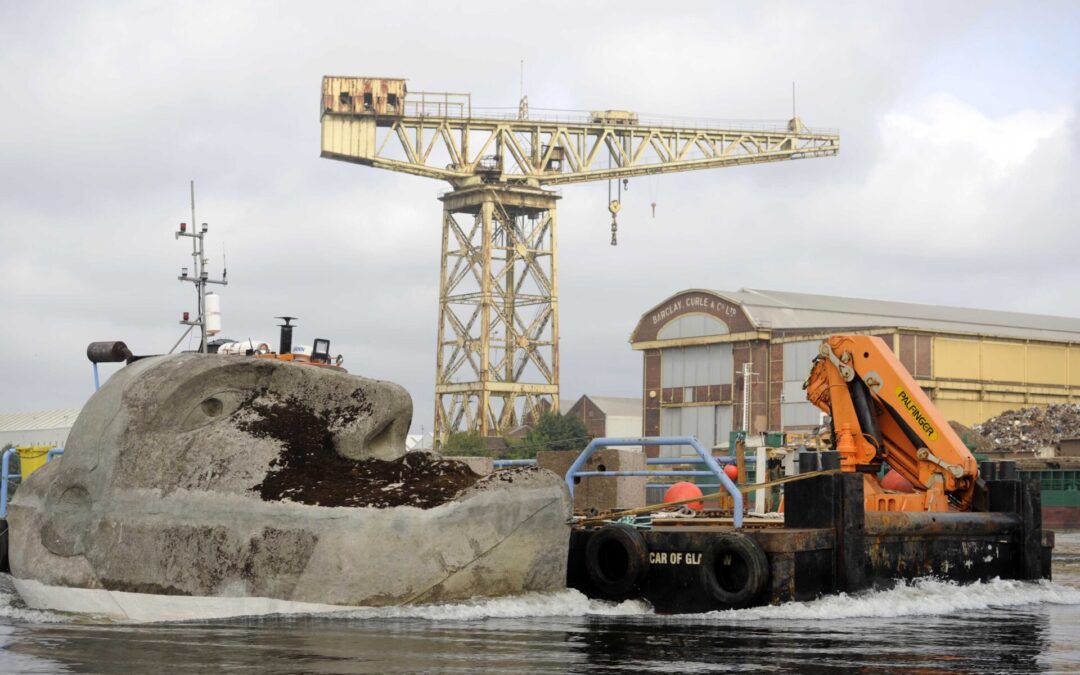 A 27-tonne concrete and steel Floating Head sculpture has been floated up the Clyde and put back on public display some 33 years after it was created for the Glasgow Garden Exhibition.

The dramatic sculpture was the work of artist Richard Groom and was made with the help of out of work shipbuilders.

At more than 7m long its stoic, expressionless appearance and enormous size make it appear like an archaeological relic of an ancient lost civilization.

Lying largely forgotten at Rothesay Dock East on the north banks of the river Clyde for many years, the Floating Head was tracked down following the artists’ death in 2019 and has been conserved and partially restored by workers from Concrete Repairs Ltd, in a project led by Sculpture Placement Group (SPG) and Richard Groom’s estate.

The sculpture is moored in the Canting Basin, at Govan Docks, from now until 6 October 2021 and will form a centrepiece of Glasgow Doors Open Day. After that it is hoped that someone will come forward to give it an appropriate longer-term home.

The project has been as much about conservation as restoration – time and weathering had permanently removed the original patina. It has been carried out in a way that means the head still shows the signs of ageing and how nature encroaches on man-made artefacts – so the moss which gradually colonised the sculpture remains in place.

Michelle Emery-Barker, SPG Co-Director, said: “People have very fond memories of the garden festival, and a huge attachment to Glasgow’s heritage as a world-centre of shipbuilding, so we’re really pleased to have the sculpture floating on the Clyde once again.

“It’s an astonishing story – an artwork that was nearly destroyed being rediscovered after decades, restored by the boatbuilders of today, and then towed back up the river and proudly put back on public display.

“We think it will really resonate with people, and hopefully be quite an attraction for Doors Open Day.”

Richard’s family managed to track down the location of the Floating Head using Canmore, discovering that it had been stored at Clyde Boatyard where it had gradually become covered in moss.

Richard’s brother, Andy Groom said: “Myself and my family were so touched at Richard’s funeral where so many of his friends and colleagues commented on all of his work especially the floating head. It became apparent very quickly we had to find it, fix it, float it. We couldn’t believe our luck when we found and met with Offshore Workboats who had rescued it.

“We then tracked down and met Ian Henderson, the owner of the head, who has allowed us the opportunity to display the head again for the public to see. We’re really grateful to all of them, and everyone else, who has made it possible for us to have the sculpture restored and returned to the heart of Glasgow.”

A crowdfunding campaign run by SPG and the family helped cover the costs of the restoration which was carried out by Concrete Repairs Ltd.

“The Garden Festival of 1988 holds a special place in the memories of many Glasgwegians and marked a turning point in Glasgow’s transformation from industrial powerhouse to cultural centre.

“The refloating of Richard Groom’s sculpture and the accompanying programme of workshops with Glasgow Science Centre offers an exciting opportunity to engage Glasgow’s communities with the legacy of the Garden Festival and Glasgow’s shipbuilding heritage.”

The project has received support from the Construction Industry Training Board, Glasgow City Heritage Trust, Sustrans Scotland’s ArtRoots fund, National Lottery Community Fund and through a Crowdfunder which received a great deal of public support.

Cosmo Blake, Art and Diversity Coordinator at Sustrans Scotland, added: “Sustrans have been delighted to support this project through our ArtRoots programme, which is funded by Transport Scotland.

“ArtRoots encourages people to walk, wheel and cycle on the National Cycle Network by supporting and empowering communities in making areas on and around the routes more interesting, inclusive and attractive spaces to explore.

“With the Doors Open Day celebration approaching, we hope that the sculpture provides a focal point which inspires local residents and visitors alike to get active on the Network, and explore more of Glasgow’s excellent walking, wheeling and cycling connections in future.”

“It’s a wonderful reminder of the historic garden festival and also serves as an inspiration for, and a celebration of, the creativity and originality that comes from the collaboration between science and art.”

Pictures of the restoration are here along with original MP4 footage from 1988 https://www.dropbox.com/sh/py189925ngbdurt/AAAQ46FI-Cp3YtvQ1ta7gOOaa?dl=0

Footage of the original project is also available here https://www.youtube.com/watch?v=eAdvrfsjt3M

The story of the Floating Head

Floating Head was one of five major sculptures commissioned for the festival that were built by shipbuilders at the Govan Docks on the Clyde.

The sculpture bonds Glasgow’s industrial history, materials and processes with the process of art-making.

The relationship between the artist and the highly skilled shipbuilders wasn’t necessarily collaborative, but the respect between them was clear.

George Bonner, one of the shipbuilders working on the project, had fond recollections of the project and artist: “Richard Groom worked as hard as I worked on his job, I’ve never met any other artist, I worked on the ‘Nose to Nose’, ‘The Bollard’ [two of the other artworks commissioned] but I never met those artists personally. I met Richard Groom, and Richard Groom put as much into his design as I did and everybody else.”

By the end of the 1980s, the docks were a site of industry in permanent decline. The Garden Festival created a curious relationship between the deserted dry docks, once home to a booming industry, and a short-term bloom of entertainment, contemporary garden design, and rides.

The sculpture itself creates a discord between weightiness and buoyancy. It’s monumental in scale, bobbing just above the water, disembodied, struggling to remain afloat.

About the National Cycle Network in Scotland:

To find out more