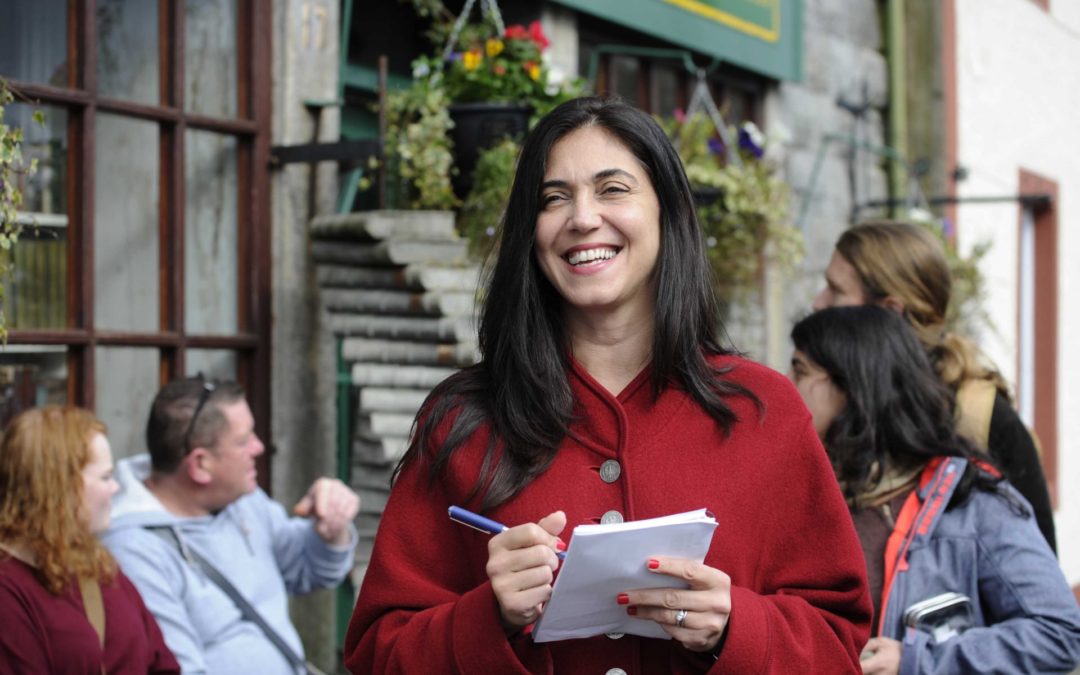 The Wigtown Poetry Prize, an annual celebration of poets and poems in the country’s three indigenous languages, will this week have its first ever digital launch.

The decision follows the success of last year’s online prizegiving ceremony (which was part of the Wigtown Book Festival) in reaching a larger, worldwide audience.

Audiences will be able to join poet and Wigtown Festival Company Chair Marjorie Lotfi and a host of others for the pre-recorded launch event on Thursday, 25 February, online at 8pm.

The launch, which is free but ticketed, will be a poetry event in its own right with readings by last year’s judges Roseanne Watt, George T Watt and Anna Frater of their own work. This year’s judges William Letford, Robert Alan Jamieson and Sandy NicDhòmhnaill Jones will also speak about what they are looking for in a winning entry.

It is hoped there will be widespread interest in the competition, which is now among the best-established in the UK – attracting over 1,020 entries last year (up 30% on 2019).

Marjorie said: “The competition is thriving with entries and interest coming from a multitude of countries on just about every continent – and a digital launch is the ideal way to engage as many people in as many places as possible.

“We very much hope that at a time when international travel, and all forms of social contact, have been so severely restricted that poetry will help bring us together.”

The competition has a whole series of categories and is open to poets wherever they live and work – past winners have been based as far afield as Canada and China.

There is also the Alastair Reid Pamphlet Prize, named in memory of one of Scotland’s foremost literary talents and which recognises a pamphlet of work rather than individual poems.

And there is the Dumfries and Galloway Fresh Voice Award, for poets living in, or from, the region who have never professionally published a full length collection.

Alison Lang, Director of the Scottish Books Council, said: “Once again, we are delighted to be supporting this prestigious prize. We are always encouraged by the response from Gaelic poets to the Wigtown Poetry Competition, and we hope that this year the standard of entries will continue to impress the judges.”

Sarah Mason, Director of the Saltire Society, said: “The Saltire Society is pleased to be sponsoring the Wigtown Scots Poetry Competition in 2021. The strength and importance of Scotland’s languages is weel kent and, through awards and projects such as this, the community can ensure they continue to flourish.

“Wigtown Book Festival has worked hard to move to an online platform during these difficult times and the increase in entries to last year’s competition is testament to their commitment.

“It is great to see poet and novelist Robert Alan Jamieson as the Scots poetry judge this year and we are looking forward to seeing what 2021 brings.”

Last year’s digital prizegiving event reached an audience of around 500 with all winners in attendance including Jane Frank, runner up of the Wigtown Prize who is based in Brisbane. Jane has been selected to take part in StAnza 2021 and will be performing on the Poetry Centre Stage on Sunday, 14 March at 4pm. This is a free online event.

A winner of one or more categories in this year’s competition will be selected at the discretion of StAnza, Scotland’s International Poetry Festival and Wigtown Festival Company to read at its 2022 event.

Eleanor Livingstone, Director of StAnza, said: “It’s wonderful that the Wigtown Poetry Prize has such worldwide reach. We look forward to another exciting line-up of winners this year, and to showcasing one of them at our 2022 StAnza festival.”

Angela Cran, Moniack Mhor Centre Manager, added: “Moniack Mhor looks forward to welcoming the winner of Wigtown Poetry Festival’s 2021 Dumfries & Galloway Fresh Voice Award for a week’s retreat at our writing centre in the beautiful Highlands of Scotland. We aim to support and nurture writers at every stage of their journey and wish all entrants to this – and Wigtown Poetry Festival’s other awards – the best of luck.”

Robert said: “The Scots tradition in poetry is ancient and varied, and still very much alive, from what I can glean of it, thanks in part to this kind of event. I’m looking forward to seeing the range that the Wigtown competition gathers in – I anticipate a bountiful hairst.”

Sandy added: “It’s a cause for rejoicing that Gaelic poetry is going from strength to strength – so many talented bards and alluring new poems. A revival of our language and literature. I’m looking forward to reading all your poems!”

The Wigtown Poetry Prize is organised by the Wigtown Festival Company. Those entering Wigtown Scottish Gaelic and Wigtown Scots categories can also submit their poems to be considered for the Wigtown Prize free-of-charge.

The competition is open for entries and details can be found at www.wigtownpoetryprize.com. The competition closes on 31 May, with a prizegiving at Wigtown Book Festival in the autumn.

About the Wigtown Poetry Prize

Founded in 2005, the Wigtown Poetry Prize is one of the UK’s best established writing competitions and a launchpad for many writers’ careers.

Refreshed and rebranded in 2019, Wigtown Poetry Prize welcomes entries from poets writing in English wherever they may live. Separate categories celebrate the best of Scottish Gaelic and Scots language poetry, a special category acknowledges a rising talent in Dumfries & Galloway, and a pamphlet prize is named in memory of Alastair Reid – local poet and one of Scotland’s foremost literary figures.

About The Saltire Society

The Saltire Society seeks to encourage everything that might improve the quality of life in Scotland. It works to preserve all that is best in Scottish traditions and to encourage new developments which can strengthen and enrich the country’s cultural life. It acts as a catalyst, celebrant and commentator through an annual programme of awards, lectures, debates and projects. Founded in 1936 is a non-political independent charity with membership branches throughout Scotland.

StAnza’s mission is to celebrate poetry, to bring poetry to audiences and to enable encounters with poetry. The organisation works all year round to deliver poetry events and projects in Scotland and beyond. Its main focus is the annual festival in St Andrews each spring and it is recognised as one of the leading poetry festivals in the UK and Europe. StAnza also actively promotes readings in foreign or minority languages and has featured poets reading in many of the national languages of Europe, as well as in regional languages and dialects. We regularly include Gaelic and Scots language poets.