Creative Hub Offers Artists a New Home in the Highlands 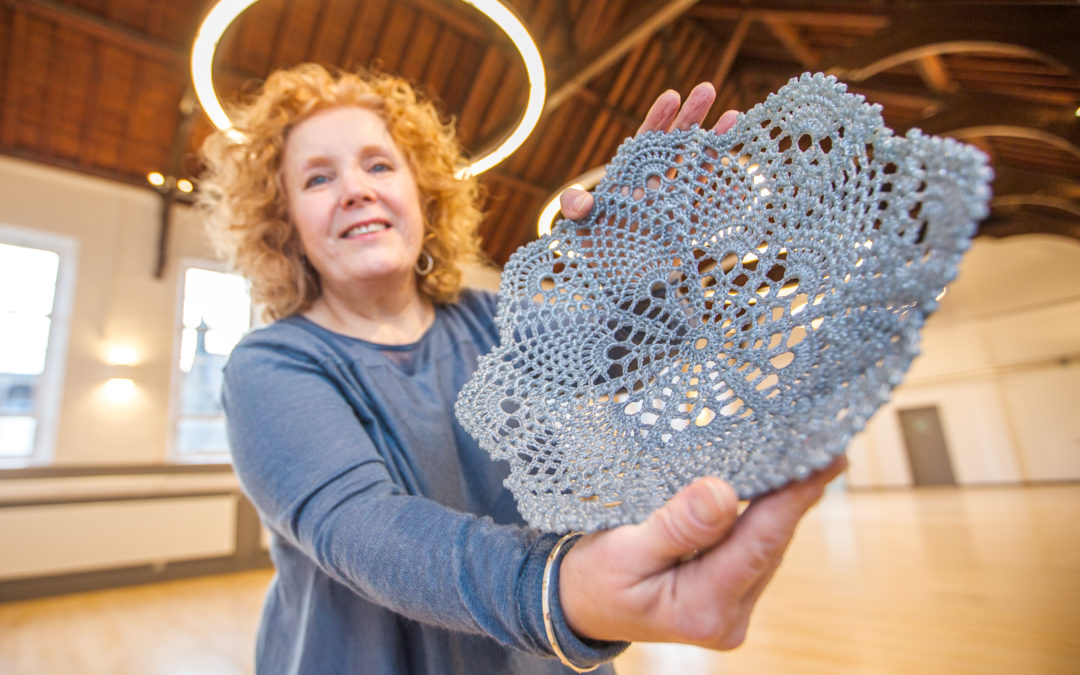 The first major arts hub in the Highlands is now open – providing urgently needed studios for everyone from photographers and textile designers to an artist who knits glass.

The two-phase Inverness Creative Academy project aims to boost the economy by bringing together artists, makers and creative companies in a high-profile centre with the facilities they need to flourish.

Creative hubs are popular across Europe. They have been successfully pioneered in Scotland by Wasps Artists’ Studios – which is behind the Inverness development – whose centres include South Block in Glasgow.

The project is already showing its worth by providing high-quality, affordable workspace to locally based people who want to live and work in the Highlands but could not find studios.

Among them is abstract artist Haywood John, from Inverness, who said: “I have been working in half of my garage until now – this is just brilliant. It makes an amazing difference to have a studio like this. It’s great for artists and great for Inverness.”

There is also the award-winning Evija Laivina.She said:“I have actually studied in the Midmills buildings. It was an amazing place and they were some of the happiest days of my life. Rescuing the building and turning it into studios like this is a wonderful thing for Inverness.

“I make a lot of props for my work and it is very challenging to do this without proper studio space. I am also really looking forward to being in an environment with other artists – it’s inspirational and it opens up all sorts of collaborative possibilities.”

The Inverness Creative Academy is also attracting fresh talent to the area including Catherine Carr, who knits and crochets glass, who moved to Inverness from England especially for the studio space.

She said: “Finding studio space has always been a nightmare. So when I heard about the old academy buildings in Inverness I was really excited. I had visited artists in Wasps studios before and knew they were good.

“We have bought a house just a couple of hundred yards away, it’s perfect. I am really looking forward to being among a group of artists again. Working alone in your own studio can be isolating.”

The completion of Phase 1 involved a £2.2 million investment that restored one of the B Listed Victorian former school buildings to create 30 studios and an exhibition space. Phase 2 will give a new future to the second building focussing on creative industries in 18 months time.

Many people have fond memories of the Midmills buildings, which were part of the Inverness Royal Academy and later Inverness College.

Audrey Carlin, Wasps Chief Executive Officer, said: “The opening of the Inverness Creative Academy is something to celebrate. It provides excellent artists and makers with a new home in the heart of Inverness.

“The Highlands is aregion of huge talent and creativity, but many people have been held back or forced to leave because there is too little studio space. The opening of the creative academy is an important first step towards reversing this trend and helping to build the strongest and most vibrant possible creative economy.”

Wasps is Scotland’s largest creative community and provides studios, workshops, offices and other facilities for 1,000 creative people in centres from The Borders to Shetland. In recent years it has created new facilities in the Highlands and Islands with projects on Skye, Orkney and in Nairn.

Fundraising is underway for the second phase of the wider £5.7 million Inverness Creative Academy scheme which will include offices for creative companies, a public café, performance and events space plus workshop areas.

When both phases are complete the creative academy is expected to a total of 109 full-time equivalent jobs generating wage earnings of £2.7 million a year.

One of the strongest supporters of the academy scheme is the University of the Highlands and Islands which hopes that it will enable more of its graduates to build careers in the region.

“Artists and makers can be transformational to cities and these facilities and the creative community they will nurture will improve and enrich quality of life. The creative academy will greatly enhance our graduates’ opportunities to work and stay in the Highlands and help further the region’s already burgeoning reputation as a place of artistic excellence.”

The project is supported by The Highland Council, HIE, The Scottish Government, Inverness City Heritage Trust and McCarthy and Stone Retirement Lifestyles Limited.

It represents a significant contribution to HIE’s Creative Industries Strategy which aimed to attract inward investment and make the Highlands an attractive location for creative individuals and enterprises.

James Gibbs, area manager at HIE’s Inner Moray Firth team, said: “Wasps have built a strong sustainable model for supporting creative communities in Scotland and we are delighted to have assisted them with a £420,000 grant towards this first phase of the Creative Academy development.

“The hub will offer shared work spaces for a variety of creative and cultural businesses and will attract young people to the area as well as create jobs for local people. At the same time, the project will bring a significant building back to life to support the rich creative community in the Inner Moray Firth area.”

The creative academy scheme is set within a wider set of initiatives to enhance cultural business and tourism, including finding new uses for Inverness Castle.

Provost of Inverness, Councillor Helen Carmichael, said:“The proposed Inverness Castle and associated developments represent the biggest culture led regeneration opportunity in the area for decades. The opening of WASPS today strengthens the cultural scene for creative people working in the area and I look forward to many practical linkages with the castle development as it progresses.”

Highland Council believes the academy will bring opportunities for artists and makers and help build the local economy – and could inspire other creative enterprises to set up in Inverness.

Ian Murray, Chief Executive of High Life Highland said: “Artist development will be greatly supported by the opportunities for training and learning at WASPS, encouraging the retention of young creative talent and attracting new creative industries to base themselves in the Highlands.”