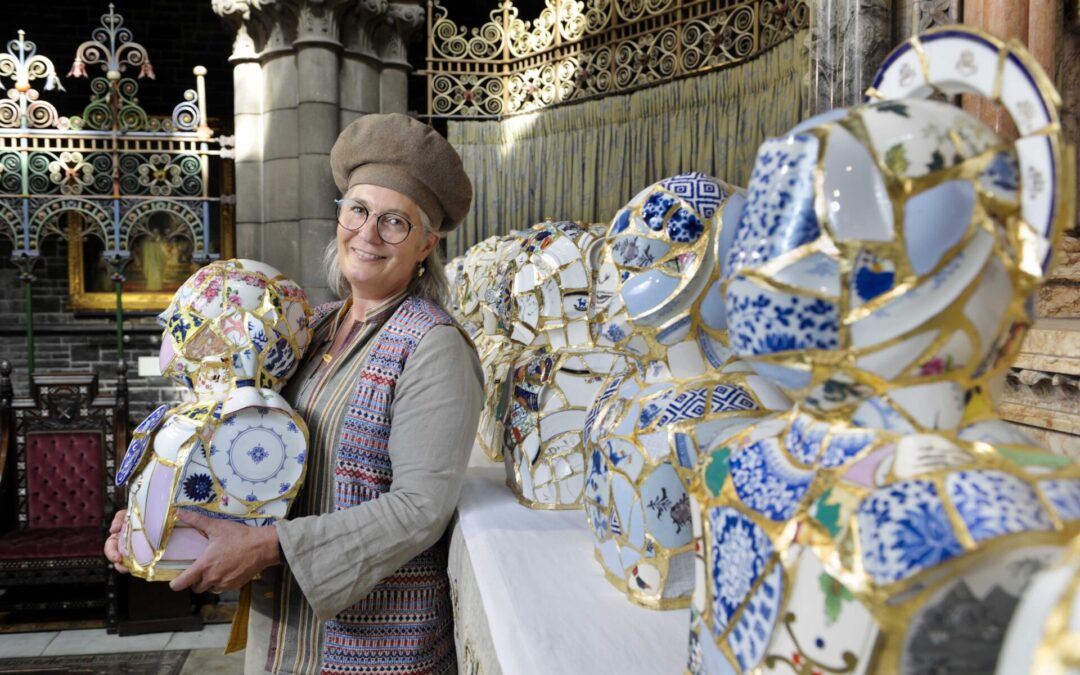 Life-sized busts of Jesus and the apostles, created from crockery fragments joined together in gold, are on display on the High Altar of Edinburgh’s Episcopalian cathedral.

The Last Supper, by multi-disciplinary artist Silvy Weatherall from Irongray in Dumfries and Galloway, is a sculptural interpretation of Leonardo Da Vinci’s iconic painting of the same name.

Silvy has a fascination with seeing new possibilities in the obsolete, the unwanted, the lost and the forgotten.

The figures are all in simplified form (partly inspired by the phrenology busts that were influential in 19th-century psychiatry) and she has deliberately avoided defining features or characteristics on most of the figures – except for Jesus, John (set to his right) and Judas.

Silvy said: “The idea began some years ago after my studio was flooded by rain and I rediscovered some broken crockery in boxes and wondered about the final meals that might have been eaten on them.

“I then began thinking about the Last Supper, and ideas about how people can be broken by events as they go through life and also how they can be remade in new forms.”

After coming up with the idea of creating busts representing Jesus and the apostles, Silvy asked friends and neighbours for donations of broken crockery. She then created the figures using the ancient Japanese art of Kintsugi (meaning “to repair with gold”).

She is also capturing another Japanese idea – of rejoicing in cracks and imperfections.

“After all,” she says “it’s our ‘imperfections’ that make us unique”

Reverend Marion Chatterley, Canon and Vice Provost of St Mary’s Cathedral in Palmerston Place, Edinburgh, said: “When Silvy first showed me the sculptures I was absolutely blown away by them. And the public response to them since they have gone on display has been wonderful.

Last Supper is at the cathedral until 31 August. The cathedral is open to visitors from 8am to 6pm daily. Visitors are asked to avoid 8am, 10.30am and 3.30pm on Sundays, when services are taking place – though anyone wishing to join the congregation is most welcome.

The concept was born after my studio was flooded by biblical rain. When clearing it out, I found several pulpy cardboard boxes of broken china in a soggy corner. They had been kept, along with other broken and useless belongings, as an ever-growing collection for a ‘rainy day project’ – a consequence of my hatred of throwing things away. As I mulled over its contents, it struck me that the flood was the ‘rainy day’ I had been waiting for. How did these previously-loved objects end up in this box? The unintentional act of breaking china is violent and generally rather alarming. Chucking out a much-loved, inherited tea pot immediately post-breakage is sometimes just too emotional. I have subsequently found that I am not alone when it comes to keeping broken china. Much of the material used in this installation has been gifted to me by kind and thoughtful friends. No plate or cup was intentionally broken for this artwork.

This sculptural series evolved from a play on words and a speculation into what was the ‘last supper’ served upon the plates and china? There is also a word play between ‘bust’ – the heads and ‘bust’ – the china, as well as the physical and emotional meaning of being ‘broken’.

The busts vary in character by virtue of their ceramic components, but they are all similar. Their pared-down shapes are informed by the shape of phrenology busts that were influential in 19th century psychiatry. The gilded joins relate to the different compartments of the brain that psychiatrists thought were relevant at the time.

With psychiatry in mind, this series was made as a response to modern-day problems surrounding mental health. Many of our current issues, felt especially during Covid-19 lockdowns, centre around existential crises, mental fragility, self-identity and our ‘air-brush’ culture: striving to achieve the impossibility of perfection albeit through filtered lenses. Here, my aim is to embrace the ethos of *Wabi-Sabi and the art of *Kintsugi; to rejoice in and highlight the cracks and imperfections. These ‘imperfections’ are what make us unique.

In 1929 Hemingway published a novel set in the 1st World War titled “A Farewell to Arms” where he discusses the universality of human pain and resilience : “The world breaks everyone and afterward many are strong at the broken places”, Leonard Cohen’s lyrics in “Anthem” mention “There’s a crack in everything, that’s how the light gets in”. – If you are interested in acquiring the piece, or for more information and press enquiries, please contact mail@silvart.co.uk.

*Wabi-sabi: In traditional Japanese aesthetics, wabi-sabi (侘寂) is a view centred on the acceptance of transience and imperfection. The aesthetic is sometimes described as one of beauty that is “imperfect, impermanent, and incomplete”
*Kintsugi (金継ぎ, “golden joinery”), also known as Kintsukuroi (金繕い, “golden repair”) is the Japanese art of repairing broken pottery with lacquer mixed with powdered gold, silver, or platinum. As a philosophy, it is similar to that of wabi-sabi: it treats breakage and repair as part of the history of an object.