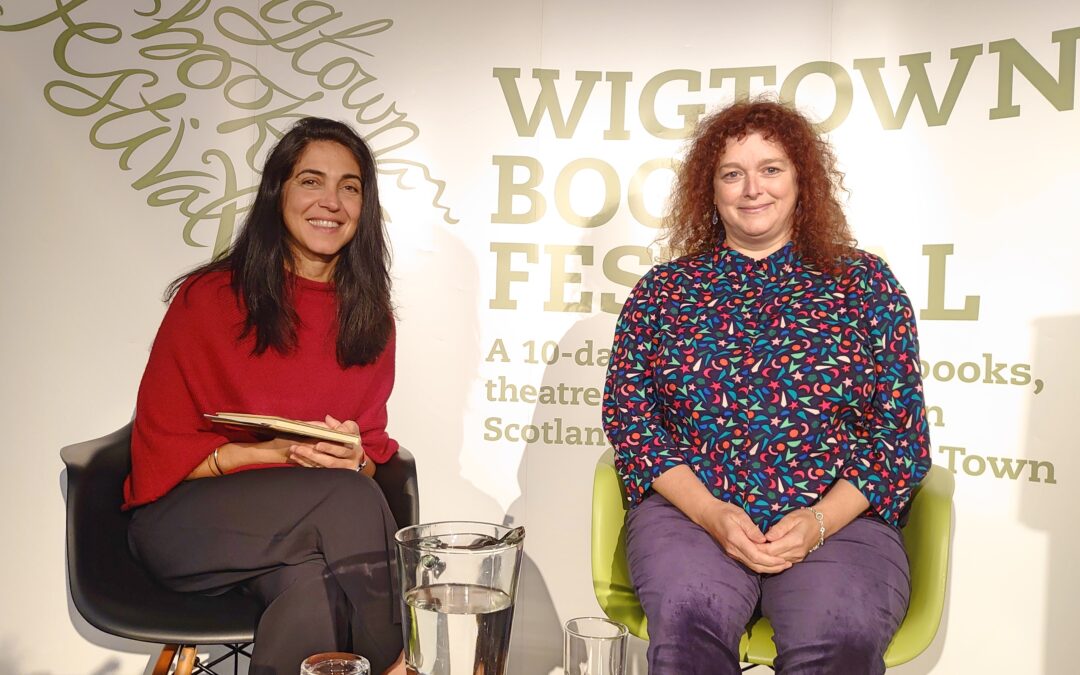 The winners of Scotland’s international three-language poetry prize have been revealed at a special event at Wigtown Book Festival.

Each year The Wigtown Poetry Prize attracts entries from around the world in English, Scots and Scottish Gaelic.

It consists of The Wigtown Prize plus separate awards for poems in Scots and Gaelic, the Alastair Reid Pamphlet Prize and the Dumfries and Galloway Fresh Voice Award, for poets living in, or from, the region who have never professionally published a full length collection.

Andrew Murray from Cummertrees received the Fresh Voice Award Gwen Dupre from Lockerbie was the runner up. Sarah Leavesley from Droitwich received the Alastair Reid Pamphlet Prize the runner up was Bridget Khursheed from Melrose.

Vahni Capildeo, who judged the Wigtown Prize and the Alastair Reid Pamphlet Prize, said: “The voicing of diverse kinds of interconnexion came across throughout the Wigtown Prize entries through plain and daring forms, as technique or texture as well as theme – a great development in poetics. Intensity, in the best sense, is finding fresh expression. The entirety of the prize entries made for a gripping and fabulous journey through the state of the art, with not a single one I’d have passed up reading.

“Calving compelled me to return to it, surprising me with depths beyond its obvious visual appeal. Glacier-like, words split, melt, and splash on the page. Conceptually, science animates the poem; skill in wordcraft that seems like cool, neutral, even natural movement. This visual display of controlled language coexists and contrasts with the urgency and terror of the event’s implications. There’s something lovely in how the poet’s imagination works both in and despite ecological crisis.

“With William Hershaw’s poem, the energy and joy that thrills and trills stayed in my ear. It was one of many excellent entries that invoke birds or engage with birdsong in ways that go beyond sheerly descriptive or romantic ‘nature writing’. Here the hopeful note, and commentary on language itself, arises easily, as our thoughts can switch between soundmaking creatures (human poet, singing bird) in growing awareness of our interconnectedness.”

“Rainfall’s deliberately delicate and pretty language charts flux and destruction. This is the individual lyric’s ability to sing, lovingly attuned to our common home, turning into collective lament. The techniques match the preoccupations: pleasing, quietly alarming repetitions and re-cyclings in forms that have been crafted as fixed, while the voice continues flowing as if free.”

Brian Holton, who judged the Scots prize, said: “I was impressed by the standard of many of the entries, which showed both a mastery of the language and control of the versification. There were only a few examples of the sort of clodhopping crambo-clink that deserves to be strangled with a copy of the Sunday Post, a few mawkishly sentimental pieces in English with the odd Scots word shoehorned in, and, surprisingly, a couple in English pur sang.

“So the number and the quality of the entries made it quite difficult to make up a short leet. There were fine poems from the Doric, Shetlandic, Central Belt Scots and elsewhere, a translation, some sharply-observed nature poems and meditations on historical events which caught my imagination.

“All in all, a good harvest of some six dozen poems. The Mither Tongue’s in good heart still, it seems.”

“A wis fair taen on wi hou guid sae monie o the poems wir, shawin a guid grip o the leid an a skeillie owrance o the versifeein. There wisna that monie plowterin screeds o crambo-clink needin ti be thrapplt wi a blaud o the Sunday Post, a wee pickle sub-Kailyaird craiturs in English wi a wheen Scots words knidgit intil them, an, for a ferlie, a twa-three in the English itsel.

“Sae the nummer an the brawity o the entries made it no an easy darg ti mak a short leet. But there wis guid wark in the Doric, in Shetlandic, an Central Belt Scots an frae ither airts forbye, yin owresettin, monie tentie observes o the naitral warld an pensefu thochts on historical events at kittlt uis up wi pleisur.

Hugh McMillan, who judged the Fresh Voice Award, said: “The winning poet Andy Murray had a natural flair for language and great range. Each of the shortlisted poets in this category deserve great praise for technique and passion in their craft. Dumfries and Galloway writing is alive and kicking.”

Writer Marjorie Lotfi (pictured left) who chaired the event, at Wigtown Book Festival on Saturday evening, congratulated the winners on their success.

“Our congratulations to Martin on this prize, and also to Rody. We are grateful to all the poets who submitted their work this year, and also to the Gaelic judge, Anna Frater, and to the whole Wigtown team. This is such an important prize for Gaelic literature, and it is hugely encouraging to see how high the quality of writing is again this year.”

The judges for 2022 were Trinidadian Scottish writer of poetry and non-fiction Vahni (Anthony Ezekiel) Capildeo FRSL, Anne C Frater who grew up in Upper Bayble, Isle of Lewis, in a home and a community where Gaelic was the main language and Brian Holton who translates poetry and prose from modern and classical Chinese into English and Scots.

Vahni Capildeo – Wigtown Prize and Alastair Reid Pamphlet Prize: Vahni (Anthony Ezekiel) Capildeo FRSL is Writer in Residence and Professor at the University of York, an Honorary Student of Christ Church, Oxford, and a Lay Dominican Enquirer (Edinburgh fraternity). A Trinidadian Scottish writer of poetry and non-fiction, Capildeo’s interests include traditional masquerade, silence, plurilingualism, and the poetics of place. The most recent of their eight books and nine pamphlets are Like a Tree, Walking (Carcanet, 2021), which was the Poetry Book Society winter choice, and Gentle Housework of the Sacrifice (Guillemot, forthcoming). Capildeo continued research on silence and trees while a Visiting Scholar at Pembroke College, Cambridge (2021). Projects have included ‘Lighthouse and Anchorage’, based on journal entries from Edinburgh winter lockdown walks and erasure poems after the medieval mystic Dame Julian of Norwich, for UNESCO ‘Imagining Cities’ hosted by the National Centre for Writing.  They are a contributing editor at PN Review and a contributing adviser for Blackbox Manifold.

Wigtown Scots Prize – Brian Holton: Brian Holton translates poetry and prose from modern and classical Chinese into English and Scots. He has published almost twenty books of Yang Lian’s work, including Narrative Poem (Bloodaxe Books, 2017) , Venice Elegy (Edizioni Damocle, various editions, 2019), and Anniversary Snow (Shearsman Books, 2019), which won the inaugural Sarah Maguire Poetry Translation Prize in 2021. His collection of classical Chinese poetry in Scots, Staunin Ma Lane, was published by Shearsman Books in 2016, and his Hard Roads an Cauld Hairst Winds: Li Bai an Du Fu in Scots was published by Taproot Press in 2022. His Scots translations of Song Dynasty lyrics, Aa Cled Wi Clouds She Cam, is coming from Irish Pages in Summer 2022. Anniversary Snow He makes regular appearances at conferences and literary festivals, and has lectured at universities in the UK, Europe, the USA, Canada, New Zealand, Hong Kong, China, and elsewhere. He has won prizes for his translations, and for his own original poetry.

Scottish Gaelic Prize – Anne C Frater: Anne C Frater  grew up in Upper Bayble in the Isle of Lewis, in a home and a community where Gaelic was the main language. After gaining an MA (Celtic and French) and then a PhD from Glasgow University, she worked in various roles in the media before returning to Lewis in 1999. She is now a Senior Lecturer on the Gaelic-medium degree programmes at Lews Castle College UHI, and Programme Leader for BAH Gaelic Scotland. Her poetry reflects on the Gaelic language and community, as well as politics and more personal experiences. Her poems can be found in the two collections, Fon t-Slige (1995) and Cridhe Creige (2017), as well as in various anthologies.

Fresh Voice: Hugh McMillan is an award winning poet from Dumfries and Galloway. He recently edited Best Scottish Poems 2021 for the Scottish Poetry Library and is a judge in the Saltire Book Awards. His latest book ‘Haphazardly in the Starless Night’ was published by Luath in 2021.

About the Wigtown Poetry Prize

Founded in 2005, the Wigtown Poetry Prize is one of the UK’s best established writing competitions and a launchpad for many writers’ careers. Refreshed and rebranded in 2019, Wigtown Poetry Prize welcomes entries from poets writing in English wherever they may live. Separate categories celebrate the best of Scottish Gaelic and Scots language poetry, a special category acknowledges a rising talent in Dumfries & Galloway, and a pamphlet prize is named in memory of Alastair Reid – local poet and one of Scotland’s foremost literary figures.

About The Saltire Society

The Saltire Society seeks to encourage everything that might improve the quality of life in Scotland. It works to preserve all that is best in Scottish traditions and to encourage new developments which can strengthen and enrich the country’s cultural life. It acts as a catalyst, celebrant and commentator through an annual programme of awards, lectures, debates and projects. Founded in 1936 is a non-political independent charity with membership branches throughout Scotland.

StAnza’s mission is to celebrate poetry, to bring poetry to audiences and to enable encounters with poetry. The organisation works all year round to deliver poetry events and projects in Scotland and beyond. Its main focus is the annual festival in St Andrews each spring and it is recognised as one of the leading poetry festivals in the UK and Europe. StAnza also actively promotes readings in foreign or minority languages and has featured poets reading in many of the national languages of Europe, as well as in regional languages and dialects. We regularly include Gaelic and Scots language poets.