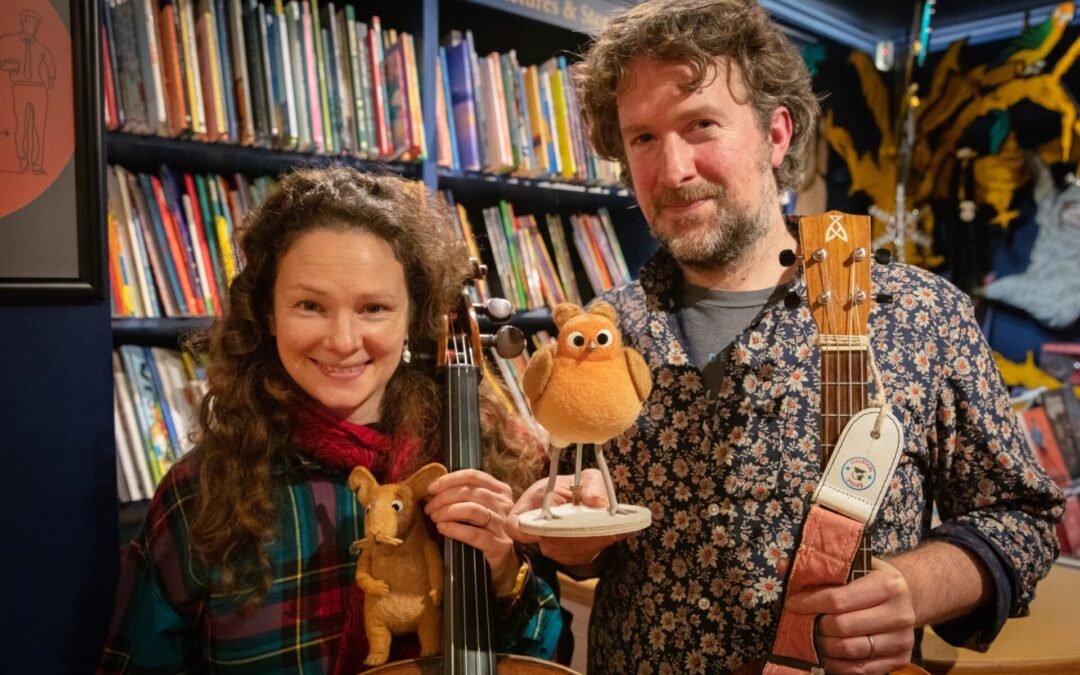 Wigtown duo, The Bookshop Band, will be delighting children and families worldwide this Christmas after Robin Robin, the first-ever full blown musical from Aardman, was released on Netflix.

Beth Porter and Ben Please, who moved to the small coastal town in south-west Scotland from Bath five years ago, not only composed and performed the music and songs but also coached the film’s stars Gillian Anderson, Richard E. Grant and Bronte Carmichael.

The 30-minute animated short tells the tale of a small bird with a big heart. Raised by a family of burglar mice, Robin (Carmichael) sets out on a big adventure to steal a Christmas sandwich so they can all enjoy a real festive feast. Along the way she encounters a curmudgeonly magpie (Grant) and faces mortal danger from the villainous Cat (Anderson) who fancies Robin and friends as her own lunch (see full synopsis below).

Beth said: “We’ve worked on short animations before but this is by far the biggest project of its kind we have ever taken on – and it’s been great.

“One of the wonderful things is that music we composed and recorded here in Wigtown is now going to be part of millions of people’s Christmas entertainment all over the world.”

The Bookshop Band, who are well-known for the literature-related songs they write and perform (sometimes accompanied by famous authors), were involved with the Robin Robin project right from its start over two years ago.

They gave each character its own musical identity – Robin’s appearances are accompanied by a recorder, the cat by a bass clarinet and the magpie’s theme is a muted jazz trumpet. There’s even a nod to the music of previous Aardman projects, like Wallace & Gromit, with the frequent use of a brass band in the background.

Much of what audiences will be listening to is pure Bookshop Band, though the husband-and-wife team brought in additional musicians for some parts and even a full choir for the finale.

Coaching sessions with the cast were important as they had been selected for the character of their speaking voices rather than because of any background as singers.

Beth said: “They were all really down-to-earth and friendly. When we met Gillian she greeted us with a nice little elbow bump. And I was really impressed with the way Richard went through his songs and made them sound just amazing. So they were all really fun to work with.”

One reason why the project worked smoothly and effectively is that it was built on long-standing relationships. Ben is the older brother of one of the film’s directors, Mikey Please, and this is their 10th professional collaboration. Previous work includes Mikey’s 2011 BAFTA®-winning short The Eagleman Stag for which Ben composed and performed the music.

Despite being most closely associated with music, Ben has an deep understanding of movies having spent a decade as an environmental documentary maker in East Africa and continuing to work as a cinematographer.

When the brothers were growing up in Bath they often carried out projects together and Ben recalls how his brother’s talent for model-making, that is a key part of his love of animation, began to show at an early age.

He said: “When I was about 10 and he was six we were making models and mine were much better. About two years later things had changed and even though he was four years younger, when we made models his were way ahead.”

In recent years their professional collaborations have broadened to involve Beth as another musical talent and, from the movie-making side, Dan Ojari, co-director of Robin Robin.

Ben said: “Mikey has an excellent appreciation of music, so he knows what we do and whether it’s right for a project, and we know exactly the sort of thing that he will like.”

This is underlined by the fact that, unusually, some of the very first ideas and recordings The Bookshop Band came up with made it into the final version.

Mikey said: “Because we know each other really well, and also have a strong working relationship, we were able to develop the music alongside the story, from the point we pitched it to the point it was made.”

At times, even, Mikey says, the songs were written in advance of the story itself and scenes were written around the music, rather than the other way round. “It was not the usual thing where you do a scene and then give it to musicians to score. The two processes went hand-in-hand.”

For media information about the band contact Matthew Shelley at Matthew@ScottishFestivalsPR.Org or 07786 704299. For information about Aardman contact Anna Lewis (Studio Publicist) anna.lewis@aardman.com or for Netflix contact Kate Bain at kbain@netflix.com.

Netflix is the world’s leading streaming entertainment service with 214 million paid memberships in over 190 countries enjoying TV series, documentaries, feature films and mobile games across a wide variety of genres and languages. Members can watch as much as they want, anytime, anywhere, on any internet-connected screen. Members can play, pause and resume watching, all without commercials or commitments.

Aardman, based in Bristol (UK) and co-founded in 1976 by Peter Lord and David Sproxton, is an independent and multi-Academy Award® and BAFTA® award winning studio. It produces feature films, series, advertising, games and interactive entertainment – current animated productions include; brand new 2021 holiday specials Robin Robin and Shaun the Sheep: The Flight Before Christmas, CGI series Lloyd of the Flies, a new stop motion series for pre-schoolers The Very Small Creatures and a Chicken Run movie sequel.

Its productions are global in appeal, novel, entertaining, brilliantly characterised and full of charm reflecting the unique talent, energy and personal commitment of the Aardman team. The studio’s work – which includes the creation of much-loved characters including Wallace & Gromit, Shaun the Sheep,Timmy Time and Morph – is often imitated, and yet the company continues to lead the field producing a rare brand of visually stunning content for cinema, broadcasters, digital platforms and live experiences around the world. Recent celebrated projects include the ‘visually astonishing’ (Guardian), BAFTA® nominated console game, 11-11: Memories Retold, the four-times Gold Cannes Lions-winning StorySign app, AR experience Wallace & Gromit: The Big Fix up – and innovative attractions for both the domestic and international market, including a 4D theatre attraction at Efteling in the Netherlands.

The studio runs the Aardman Academy which has a commitment to nurturing talent by delivering excellence in film and animation training and mentoring. The Aardman Academy offers a variety of courses from intensive one-day workshops teaching production skills and storyboarding, to comprehensive twelve-week courses for professionals in craft based subjects from model making to animation.

In November 2018 it became an Employee Owned Organisation, to ensure Aardman remains independent and to secure the creative legacy and culture of the company for many decades to come. See www.aardman.com

Bronte Carmichael (Christopher Robin, On Chesil Beach) voices Robin, a beguiling little bird with a slight identity crisis, Oscar® nominee Richard E Grant (Can You Ever Forgive Me?) voices Magpie, an obsessive collector of shiny stuff who takes her on a journey of self-discovery. Golden Globe® winner Gillian Anderson (The Crown, Sex Education) voices the villainous Cat who stands between them, a sandwich and a Christmas star and BAFTA award winning Adeel Akhtar (Utopia, Four Lions, Murdered by My Father ) voices Dad Mouse, a caring but cautious soul who is single-handedly raising a family of five children – one of whom happens to be an adopted Robin.

After a shaky nativity of her own – her unhatched egg falls out of the nest and into a rubbish dumpster – Robin comes out of her shell, in more ways than one, and is adopted by a loving family of mice burglars. More beak and feathers than fur, tail and ears, more cluck and klutz than tip-toe and stealth, she is nonetheless beloved by her adopted family, a Dad Mouse and four siblings. As she grows up, though, her differences make her something of a liability, especially when the family take her on furtive food raids to the houses of the humans (pronounced ‘Who-mans’) in the dead of night.

Neither fully bird, nor fully mouse, Robin embarks on a food heist of her own to prove herself worthy of her family and also, hopefully, to bring them back a Christmas sandwich. Along the way, she encounters a curmudgeonly magpie who has a house full of glittery things that he’s stolen and, as it turns out, an unlikely heart of gold. He has set that heart on stealing the sparkling star from the top of a local who-man family’s Christmas tree. And who better to help him than the eternally optimistic Robin herself. The adventure brings them face-to-terrifying-face with a menacing, yet very cool Cat, who has a warm place for birds and mice alike: her tummy.

Can they survive? Can they bring home the sandwich and the star? And, most of all, can Robin discover, and learn to love, who she really is, delighting her family and earning her wings in the process?