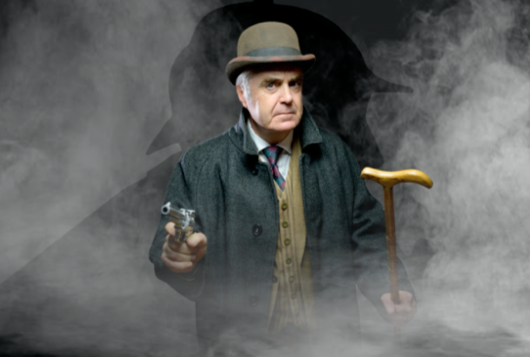 WATSON: The Final Problem – an audio interpretation of the classic story, prior to a solo stage adaptation, when allowed!

John Watson is alone. London seethes with false reports and rumour and it is time to set the record straight… “I alone know the truth and I mean to see the truth told.” So Watson tells his tale. A tale of long buried secrets, betrayal and death. There is a shadow in the gutters of London. A spider’s web of poisonous intrigue lies across the city. Someone is playing a despicable game and Holmes and Watson must face their greatest ever challenge.

The intention was to perform Watson: The Final Problem on stage this autumn and on tour in 2021, but in the current circumstances the aim was to make a radio-style recording in isolation to help develop the project and keep the creatives busy in lockdown. In true Sherlock Homes style, ingeniously improvising with home equipment, Tim Marriott recorded the script in a makeshift home studio made with a microphone and laptop under a duvet held up by a kitchen chair, Clive Whitburn created the score in his garden shed, and Bert Coules drew on all his past BBC experience to stitch the piece together using only the electronic equivalent of a razor blade, splicing tape, and a collection of improvised sound effects.

WATSON: The Final Problem, will be available at www.smokescreenprods.com from Sunday May 24.

Tim Marriott is perhaps best known from his sitcom days

Empire
Marriott’s other TV credits include Doctors, The Bill, An Actor’s Life for Me, The Main Event, Luv and film credits include forthcoming features The Real Thing, Love Type D and Revelation. He recently returned to the stage after a 17-year break teaching English and drama, touring to festivals around the world with new work such as Mengele, Shell Shock, All Change and Judas.

Bert Coules wandered through a succession of jobs from fringe opera company manager to BBC radio drama producer-director before becoming a full-time writer at the beginning of 1989.
Coules works in a wide range of genres but is especially associated with crime and detective stories: he was the head writer on the BBC’s unique project to dramatise the entire Sherlock Holmes canon and went on to script four further series of original Holmes and Watson mysteries. He currently has a Victorian-era TV series about the doctor and the detective, 221B, under option.