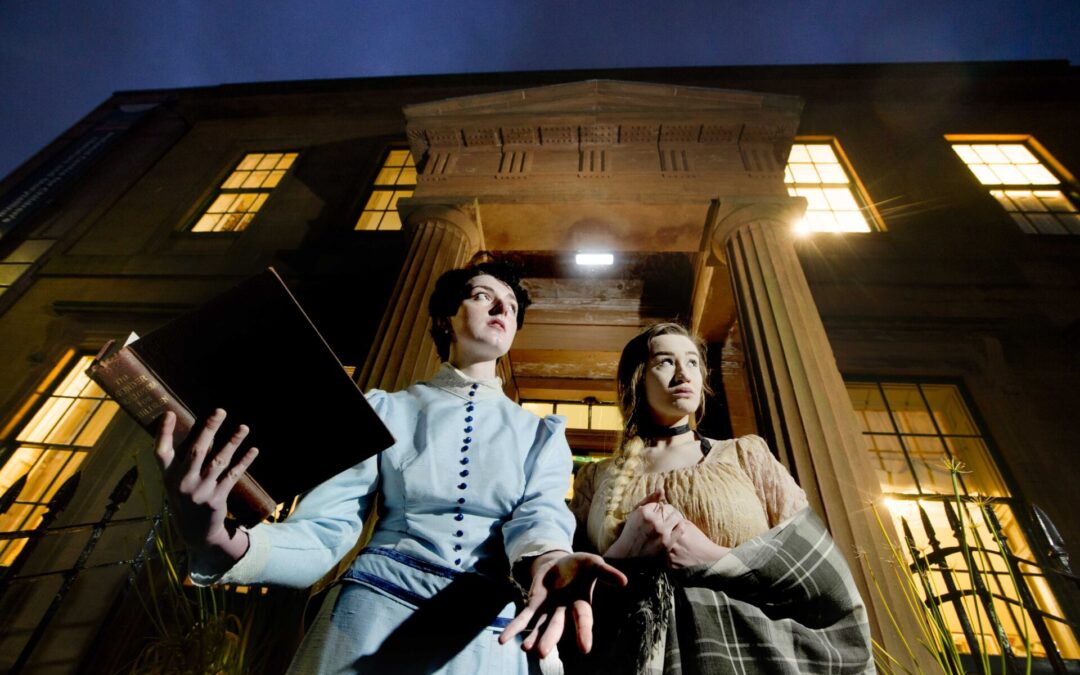 Christmas ghost stories, bold new theatre and a film festival challenge – all these and more are soon to take place as part of the Together Again season of small-scale, grassroots arts and cultural events.

The Together Again initiative, organised by the independent arts organisation DG Unlimited with over £42,000 of funding from Dumfries & Galloway Council, began in the spring and has already seen a host of activities take place in towns and villages across the region.

This weekend sees the world premiere of a new play called Gazing, written and produced by Carolyn Yates, at the CatStrand arts centre in New Galloway, The Print Room in Wigtown and at The Theatre Royal, Dumfries.

The play is a bold, funny and illuminating interweaving of musings, memories, poetry and provocations about how society views older women’s bodies.

Carolyn Yates says: “I was inspired to write Gazing by fellow Castle Douglas resident, Kim Ayres’ amazing black and white nude photographs of women over 50 which challenge conventional notions of beauty and youth. Working with the cast, Linda Duncan, McLaughlin, Sheila Grier and Kirsty Miller, to embody the principle of really looking deeper than skin surface has been a joy.”

Then as the festive season gets going there will be Bleak Winter – A Live Victorian Ghost Story Extravaganza taking place over three nights at Moat Brae, Scotland’s National Centre for Children’s Literature and Storytelling in Dumfries.

The family-focused event includes a specially created production called 101 George Street which is a revival of a forgotten supernatural tale that dates from 1860. There will also be a two hander performance of A Christmas Carolfrom Fox and Hound Theatre Company and the event culminates in an evening tour of the Neverland Discovery Garden by Mostly Ghostly.

John Molloy, Director and Producer, said: “The dark nights around Christmas are traditionally a time for spooky tales and this one caught my eye when I was searching through a book of long forgotten Victorian short stories.

“It tells the tale of a mysterious visitor who comes knocking one Christmas eve in the dead of night.

“And there’s much more to look forward to as well with a special adaptation of A Christmas Carol and a unique collaboration between Dumfries & Galloway Dance and Paragon Music. The evening then ends with ghostly tour of the gardens.”

Finally, as part of the Bookspired Youth Film Festival in Wigtown, young people from the Douglas-Ewart High School, Newton Stewart, will be helping create the sound effects for a short movie that’s being made in just one week.

The project they are contributing to will see film-maker and musician, Ben Please, film, edit and screen a complete movie provisionally called Wake Up Wigtown.

Matt Kitson, of Driftwood Cinema which organises Bookspired, said: “The idea is to make the entire movie during the week of the festival, which runs from 24 to 30 January 2022, including screening it at the end.

“It’s going to be about all those people who are hard at work in the early hours of every day, doing the things that make a community like Wigtown tick, while the rest of us are warm in our beds.

“And as with most films the sound is hugely important, so the work Ben will be doing with the school students to get this right, will have a really big impact.”

Together Again, which runs until next April, champions the vital role that creativity and culture plays in our lives, how it connects people, contributes to the region’s economy, and promotes community cohesion and individual wellbeing.

Stephen Lacey, Chair of DG Unlimited, said: “The Together Again Season continues to play an important part in slowly bringing our communities safely together as we emerge from the pandemic. As we can see from this fantastic spread of high quality creative activities and events it is doing this by placing the arts at the heart of our communities

Stephen went on to add: “Dumfries and Galloway has a brilliant cultural offer with exceptional talents in all arts disciplines and this is something that Together Again showcases and celebrates.”

Together Again forms an important part of Dumfries and Galloway Council’s Major Festivals and Events Strategy 2021/22.

Councillor Adam Wilson, the Council’s Events Champion, said: “The Together Again arts season has been a welcome introduction to Dumfries and Galloway’s events calendar in 2021. There has been great creativity in the programme and lots to see and do. I’m thrilled at the scope and variety of the programme and the many hundreds of people either putting on events within the Together Again season or attending performances and exhibitions.”