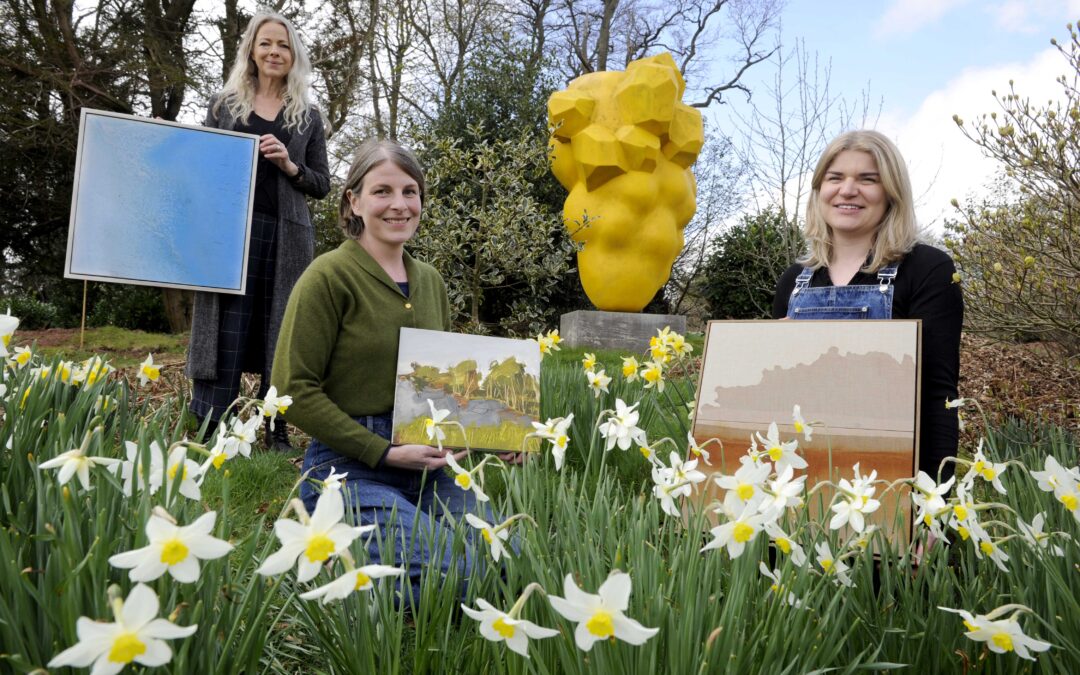 Three artists inspired by the wild will be holding a special exhibition as part of the Marchmont House Open Studios Weekend.

Taking place on 14 and 15 May the event will also be a chance to meet visual artists and craft makers, based in the growing number of Creative Spaces – high-quality studios – that have been developed in the historic outbuildings around the Palladian mansion near Greenlaw.

Another attraction is the chance to go on one of the sculpture tours, and discover the remarkable collection created by Marchmont Director Hugo Burge in the grounds and gardens of the stately home.

The Wild Spaces exhibition, in The Old Squash Court studios, features pieces by Borders-based visual artists Anna King, Hayley McCrirrick and Mary Morrison, some of which have been inspired by the 1,500 acre estate. Much of the work is about the intersections where the wild and the man-made meet.

Anna, from Gordon, said: “We all have a love of the natural world and wild spaces, often the forgotten and peripheral spaces – the places at the edge.

“I’ve always been interested in the places where man and nature meet – the overlooked and unloved margins of our landscape, like the former commercial forestry areas after the trees have been felled.”

Anna’s work is largely representational while Hayley and Mary are known for their more abstract approach.

For Anna the exhibition marks a return to Marchmont, as she lived on the estate from 2009-12 and the Old Squash Court was her studio – it still has some of her paint marks on the floor.

Mary is based in Walkerburn but is from the Isle of Harris and her paintings suggest journeys, edges and shifting tidal lines. Although the starting point is highly personal, her work speaks to the universal and in preparation for this exhibition, Mary has found a creative connection to the work of Rory McEwen.  Rory was born and raised at Marchmont then had a studio at nearby Fogo.

Mary said: “I knew little of Rory McEwen’s art and life until last year when I was doing some research ahead of this exhibition.  I find Rory’s life inspirational, and have been deeply moved in particular by the paintings of leaves he made in the late 1970s ahead of his early death. Although our work is visually very different, I feel there is a link in the attempt to capture the transient and fragile qualities of nature and time while referencing an autobiographical journey connected with specific places.”

One of the pieces on display during the weekend is a large work commissioned by Hugo Burge in 2017 of the beautiful but rundown glasshouses in the walled garden.

Anna said: “The glasshouses were about to be restored as part of the ongoing renovation of Marchmont house and the estate, so it was really special to be able to make a record them in their state of wild and overgrown decay.”

Hayley, based in Selkirk, combines natural materials and traditional craft technique to inform and inspire her work on cloth and paper. For this exhibition Hayley will be showing work inspired by the colours and materials gathered in and around the Old Squash Court.

Mary will be presenting pieces inspired by the artistic process of Rory McEwen (who was born and raised at Marchmont then had a studio at nearby Fogo), particularly in his botanical works, which capture the transient and fragile qualities of nature and time while referencing an autobiographical journey connected with specific places.

Visitors will also be able to browse and buy at a Makers’ Market featuring Julia Linstead’s glass, Pauline Burbridge’s textiles, Martha Ellis’ art, Luke Batchelor’s stone carving, Marianne Hazelwood’s botanical painting. There will be two social enterprise stalls supported by the Marchmont Maker’s Foundation – one for ReTweed and the other for Garvald members to sell their textiles, woodwork and glass.

There will be art workshops for children run by Georgie Faye using clay, printing and gold leaf – inspired by Marchmont House and the estate.

On Sunday Marchmont welcomes the Compact Disco Defender, which will be driving in to play some chilled out tunes.

Lucy Brown, Managing Director of The Marchmont Makers Foundation, who is helping organise the Open Studios, said: “If you enjoy art and craft and fabulous countryside then our Open Studios Weekend is perfect for you.

“It’s a lovely chance to meet artists and makers, see their work, browse a Makers’ Market and enjoy some great food before taking one of the sculpture tours round Marchmont’s beautiful gardens.”

The artists taking part in the Open Studios event are:

The Open Studios, event is free (there is a £3 suggested donation to the Foundation) but with timed ticketing – so visitors need to book in advance. Dogs on leads are welcome.

About the Wild Spaces artists

Anna King is fascinated by wastelands, derelict buildings, field edges and patches of scrub. While living at Marchmont, Anna was drawn to the old glasshouses on the estate, painting them regularly.  In 2017 Anna was approached by Hugo Burge to revisit the now restored Marchmont Glasshouses and will be exhibiting a large work made as part of this commission.

Hayley McCrirrick is a graduate of Heriot Watt School of Textiles and Design and her work combines natural materials and traditional craft technique to inform and inspire her work on cloth and paper, Hayley seeks to create work which feels grounded to landscape and timeless. Inspiration comes from surrounding lochs, hills and forests as well as Japanese and Korean minimalism. Her imagery is reminiscent of landscape, but is never literal.  Screen-printed works with rich blocks of indigo, black or earth-coloured pigments contrast sharply with the natural tones of the textile substrates.  These suggest mountains, ridges and natural formations which are echoed in her delicate line drawings.  Hayley established her studio at the Haining in Selkirk in 2018 and since then has shown work in London, Edinburgh and Paris.

Mary Morrison evokes landscape through the alchemy of oil based media and textural work which combines with graphic elements of annotation suggesting music, mapping and measuring. She is led by the pursuit of ‘memory places’, largely informed by the space, light and textures of the Isle of Harris where she grew up. Mary’s intention is not to depict a landscape in a literal sense but to explore in a more abstracted way the relationship between the individual and the landscape that has shaped them, something you carry with you – a ‘geography of the mind’. Her work suggests journeys, edges, tidal lines – always shifting.