The art of Rory McEwen celebrated in Marchmont House exhibition 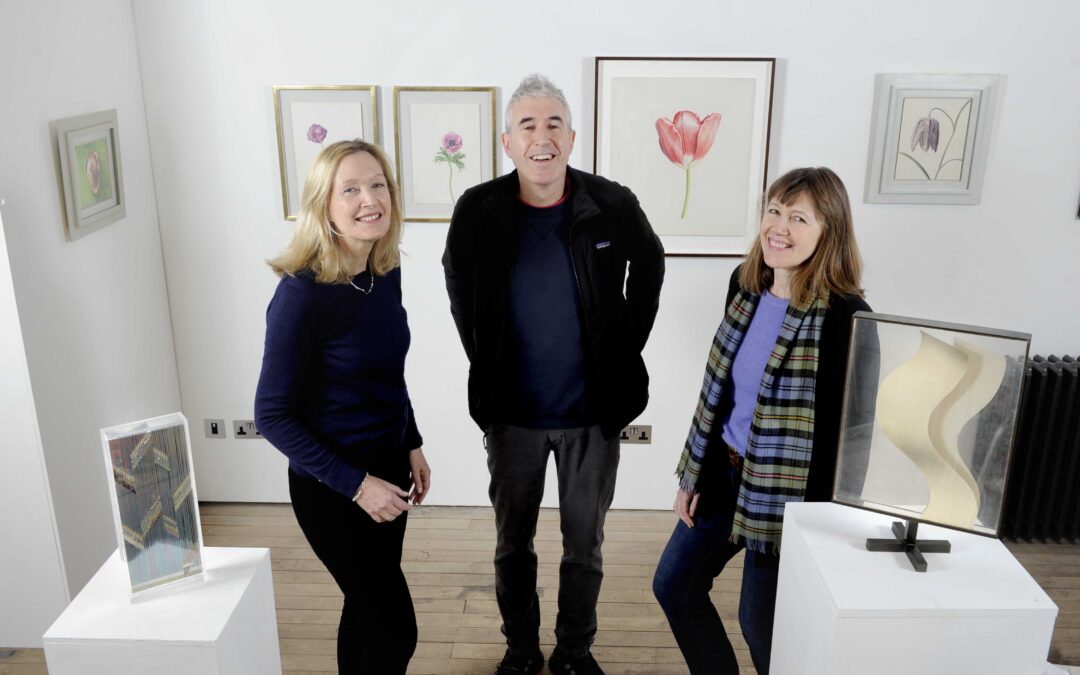 The children of Rory McEwen, the 60s Scottish folk and blues legend who changed direction to become one of the world’s finest botanical artists, have launched an exhibition of his paintings and sculpture.

Adam, Christabel and Flora helped set up The Spirit of Rory McEwen which is showing all this week at Marchmont House in the Borders, which was their father’s childhood home.

The exhibition includes around a dozen botanical pieces but extends far further. There are also a large Scottish landscape, collages featuring family photos, and small sculptures. Some come from the collection at Marchmont House, which is now a home for the arts and creative activity, others belong to the McEwen family.

The weekend, during which they were joined by Rory’s other daughter, the artist Sam McEwen, also saw a series of events celebrating his life and achievements and marking what would have been his 90th year.

Musician Jools Holland, who is married to Christabel, took part by Zoom after testing positive for COVID.

The weekend also saw the launch of an appeal by the Marchmont Makers Foundation to raise funds to provide artists’ residencies at the nearby Fogo Cottage, which Rory bought and used as a studio after he turned away from a career in music and TV to concentrate on art.

Christabel Holland, a child psychotherapist, said: “It feels quite moving to be showing Rory’s work, not only at the house he grew up in but in this new centre of art and creativity which he would have so admired and applauded.”

Sam added: “The Creative Spaces studios are a wonderful showcase for Rory’s beautiful depictions of nature. We are so pleased that Hugo Burge and his team were able to put this exhibition on and hope that lots of people will be able to enjoy it over the next week.”

The Spirit of Rory McEwen exhibition is also the precursor to a much larger series of exhibitions due to take place at six locations in the USA in 2023-25 (see details below).

Flora McEwen Brooks, said: “We have just confirmed a series of six shows across America in collaboration with Kew Gardens and the Oakspring Foundation – this is incredibly exciting as Rory has many fans in the US who haven’t had the chance to see his work and we hope it will allow a broader audience to enjoy his vision of nature in all its glory.”

Rory’s work was much admired in America, with two of his paintings being hung in the Kennedy White House – which will both be in the US exhibitions.

Adam McEwen, a renowned visual artist who has just an exhibition at the Gagosian, said: “Coming back to Marchmont along with many of Rory’s oldest friends and family in what would have been his 90th year feels like an wonderful way to honour and celebrate the beautiful work he did. We are immensely proud of his legacy and grateful to Marchmont House for allowing us to share his art with others.”

Such was the quality of Rory’s botanical paintings that a tulip was named after him in 2002 and Martyn Rix’ exploration of his art, The Colours of Reality, continues to be Kew Gardens’ top selling book.

To many Rory was best known as the host of the ground-breaking folk and blues television show Hullabaloo and for his performances playing the 12-string guitar.  Guests included luminaries of the folk revival scene Martin Carthy, Rambling Jack Elliot and Sonny Boy Williamson.

But for nearly two decades, between 1964 and his death in 1982, Rory concentrated much of his prodigious talent on creating exquisite renditions of plants and flowers in watercolour on vellum, as well as sculptures and landscapes.

Marchmont bought his cottage at Fogo last year and transformed it back into a studio and the Marchmont Makers Foundation now wants to create annual free residencies for artists.

Lucy Brown, the foundation’s Managing Director, said: “The Fogo residency will allow today’s artists the time, space and financial freedom to concentrate on the development of their own work without the demands of deadlines or public presentation.”

This series of shows has been made possible by a collaboration between The Royal Botanic Gardens at Kew and the Oak Spring Garden Foundation, which was endowed by the late Mrs Bunny Mellon who was an early collector of Rory’s work and responsible for lending two paintings to the Kennedys at the White House.