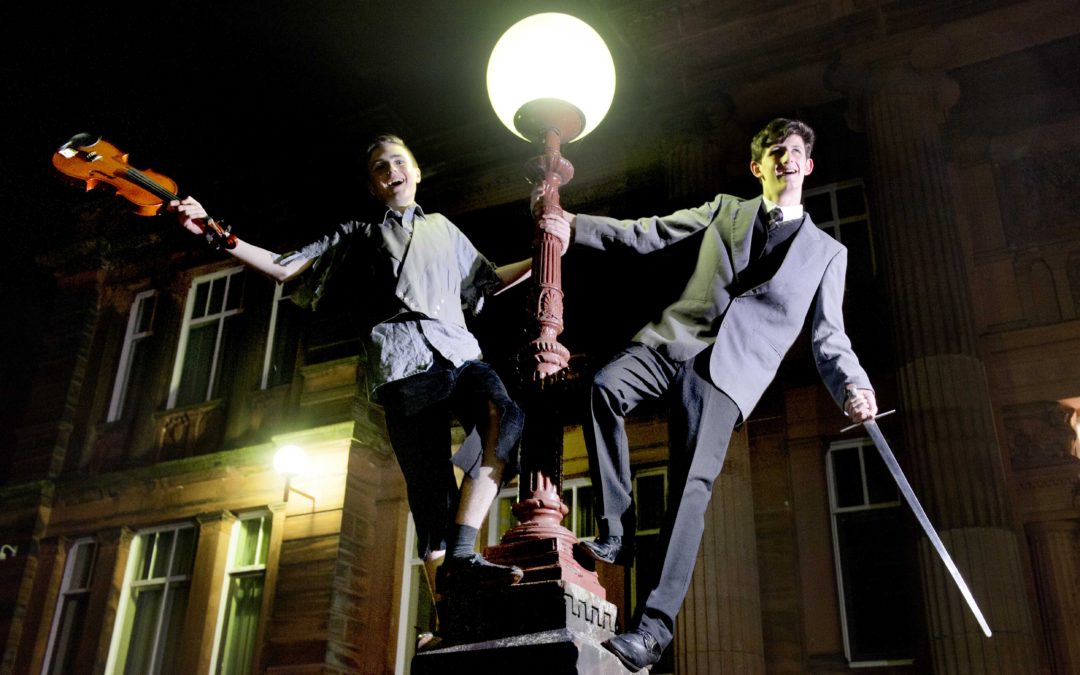 The school drama club founded by JM Barrie will help celebrate his legacy this weekend with an evening of drama and music in front of an audience including Joanna Lumley.

Staged, which takes place at Dumfries Academy on 24 November, where the teenage JM Barrie studied from 1873-78 is a highlight of the Dreams for the Future Festivalin Dumfries.

The festival is part of Scotland’s Year of Young People 2018 and is a pre-opening event for Moat Brae house and gardens which will open to the public next spring as the new National Centre for Children’s Literature and Storytelling.

Among the young actors taking part in Stagedwill be Ross Whalen who will take the role of JM Barrie in a short production called Barrie’s Legacy.

This is written and performed by members of the drama club that Barrie and his friends set up and which remains a dynamic part of school life today.

Ross said: “JM Barrie is such a well-loved figure and it’s such an honour to be able to bring him to life onstage in celebration of his work and 140 years of drama at Dumfries Academy. Researching and writing this play with my friends has been a rewarding experience.”

Staged will also see The Theatre Royal Junior Guild of Players perform the first full production of Bandelero the Banditsince 1877.

This was Barrie’s earliest play, which he wrote as a 17-year-old student at the academy. It generated national controversy after being condemned in the press by local minister the Rev D L Scott as “grossly immoral” and appealing to “the irreligious, the frivolous, the giddy”. However, Barrie won widespread support including from the actor Sir Henry Irving and the Duke of Buccleuch.

The play is a melodramatic tale of misunderstandings in which an attempt is made to free the unfortunate Bandelerowho has been captured and accused of a murder he didn’t commit.

It is being directed by Emily Kelly, who said: “It has been a privilege for the Junior Guild to work on Bandelero the Bandit. Most are aware of the Theatre Royal’s connection with JM Barrie and they are eager to perform the play.

“I really feel that this is a great opportunity for the Junior Guild to showcase their talent to a wider audience, and I have thoroughly enjoyed working with them.”

Another short play called The Lost Boys’ Reuniontakes place in a modern setting and imagines what would happen if Peter Pan contacted his old comrades for one last adventure. It is being performed by a group of 16-26 year olds with additional needs who are part of the Dumfries Arts Awards Programme.

Heather Molloy, who wrote the script and has led the project, said: “They are a really talented bunch of young people and this is a production that will challenge people’s perceptions. The group helped develop the script, made the props and will be performing the show.

“For some of them it’s the first time they have stepped on stage – largely because no one ever believed that it was something they could do.”

Staged will also see the world premiere of a piece of music entitled Peter Pan Moat Brae, by 24-year-old composer Patrick Dupuy which will be performed by Dumfries and Galloway Schools Ensemble with a dance piece by Dumfries School of Dance.

Fiona Somerville, who leads the ensemble and is a music teacher at St Joseph’s College, said: “Working with such a talented and hardworking group of young musicians has been a privilege. Pupils from four different secondary schools are coming together to rehearse weekly. There have been challenges along the way but the young people have shown enthusiasm and commitment; I look forward to their performance on Saturday night.”

Moat Brae is next door to the academy and is where the young JM Barrie and his friends played the games that inspired Peter Pan and his ideas for Neverland.

It has been rescued from dereliction and restored to its Georgian splendour. Work is now underway to fit it out with exhibitions, interactive displays and many other features.

The project to save the building where Peter Pan began and turn it into the National Centre for Children’s Literature and Storytelling has been run by the Peter Pan Moat Brae Trust (PPMBT) whose Patron is Joanna Lumley.

Simon Davidson, Moat Brae’s Centre Director, said: “Staged is a really exciting event because it is bringing together so many young people, with so many skills and talents in a real celebration of their creativity. We are particularly pleased that Joanna will be joining us for the evening.

“We want Moat Brae to be a really inspirational place that gives young people the opportunity to get involved with all sorts of exciting events and activities.

“The whole Dreams for the Future Festival has been co-curated by young people and gives a foretaste of what we hope to achieve in the years ahead.”

Dreams for the Futuretakes place from 24 November to 2 December (see attached document for further details) and is supported by the Year of Young People 2018 event fund, managed by EventScotland, part of VisitScotland’s Events Directorate.

About J M Barrie and the Trust