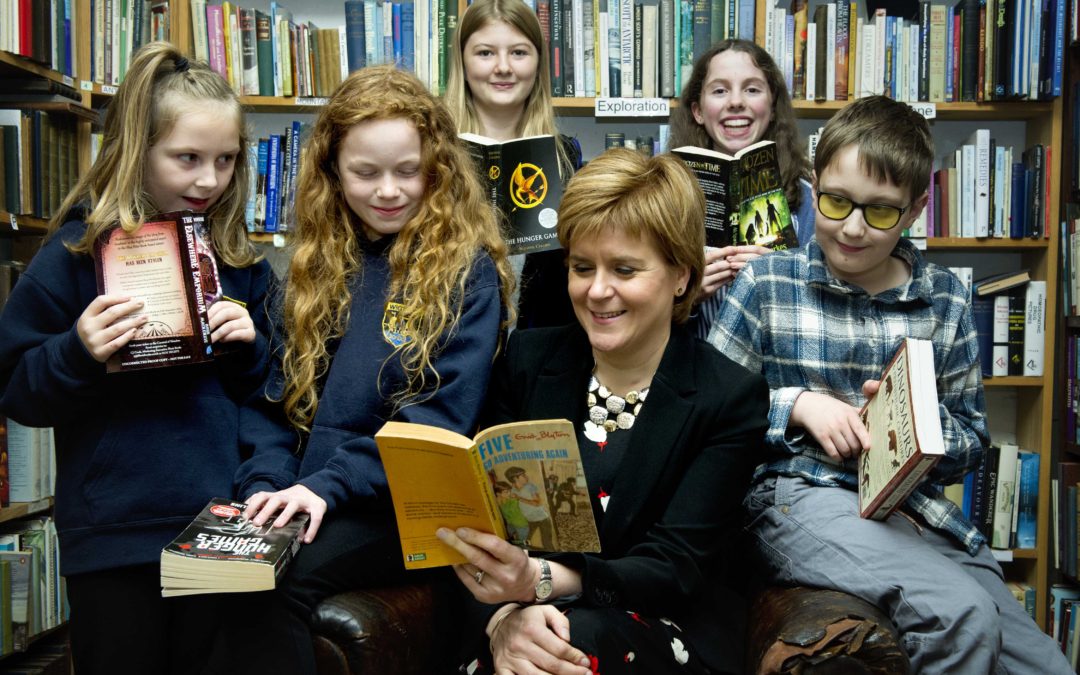 Scotland’s First Minister Nicola Sturgeon helped get the 20th annual Wigtown Book Festival underway with a talk about her lifelong love of books.

She also met young people from the festival’s Book Bridge team to chat about their favourite reads.

The Book Bridge team has played an important role in this year’s event, helping design a programme of events to appeal to 10-13 year olds like them.

The festival has also introduced its exciting Big Wig programme for under 10s and a WTF programme aimed at young adults up to the age of 26.

The First Minister met the youngsters in The Bookshop, Scotland’s largest second hand bookshop, where she told the young people that her favourite books when they were her age included Enid Blyton’s Famous Fivestories.

The First Minister’s own event, entitled A Life in Books, explored the works that have shaped her and from which she has learned the most. The discussion, hosted by Damian Barr, covered authors from Muriel Spark to John Boyne.

The First Minister said:“I’ve thoroughly enjoyed having the opportunity to spend time discussing the books I’ve had the benefit of reading over the years and that have helped shape my life, and the importance I place, both from a personal and professional perspective, on making time to lose myself in a book.

“The Wigtown Book Festival is a fantastic event on the literary calendar, and to have reached their 20th anniversary is a great achievement. I wish them all the best for a successful festival this year, and for many more to come.”

Duncan Adams said his favourite book is The Complete Illustrated Encyclopedia of Dinosaurs and Prehistoric Creatures, while Edana Muir opted for the Hunger Gamestrilogy by Suzanne Collins. Helena Cochrane chose Frozen in Timeby Ali Sparkes and sisters Eloise and Natasha Kitson selected The Hunger Gamesseries and The Elsewhere Emporiumby Ross Mackenzie – who is speaking at Wigtown Primary School on Sunday 23, September.

Adrian Turpin, Wigtown Book Festival Artistic Director, added:“This has been a great way to get our 20thfestival underway.

“We believe that reading, hearing and telling stories are experiences that everyone can enjoy and it’s vitally important for events like ours to nurture a love of books at an early age.

“It’s also enormously valuable for young people to have role models like the First Minister who will share their own love of reading with children and young people.”

This year’s festival, from 21 to 30 September, is a landmark for an event that has grown from small beginnings to be one of Scotland’s best-loved festivals.

The line up of guests includes fiction writers, poets, broadcasters, philosophers, countryside lovers, historians and many more. There is, as ever, a substantial presence from the political sphere including Liberal Democrat MP and equality campaigner Jo Swinson and former Conservative Home Secretary Kenneth Baker.

The festival always puts an emphasis on authors from and books that are relevant to Dumfries and Galloway. Historian Ted Cowan will discuss John Ross of Stranraer’s ill-fated voyage to discover the Northwest Passage, Shaun Bythell talks about his bestselling Diary of a Booksellerone year on and Sara Maitland presents A Pocket Pilgrimage – St Ninian’s Cave.

Julia Muir Watt will look at Whithorn: An Economy of People. Meanwhile journalist Stephen Norris explains the unique charm of the Galloway hills and Jessica Fox discusses her re-released memoir Three Things You Need to Know About Rockets, which has now been optioned by a major Hollywood film company.

There will also be a series of events as special celebrations for the 20thfestival. These include panel discussions offering writers’ perspectives on how Scotland has changed in the past two decades and what Europe will look like 20 years from now.