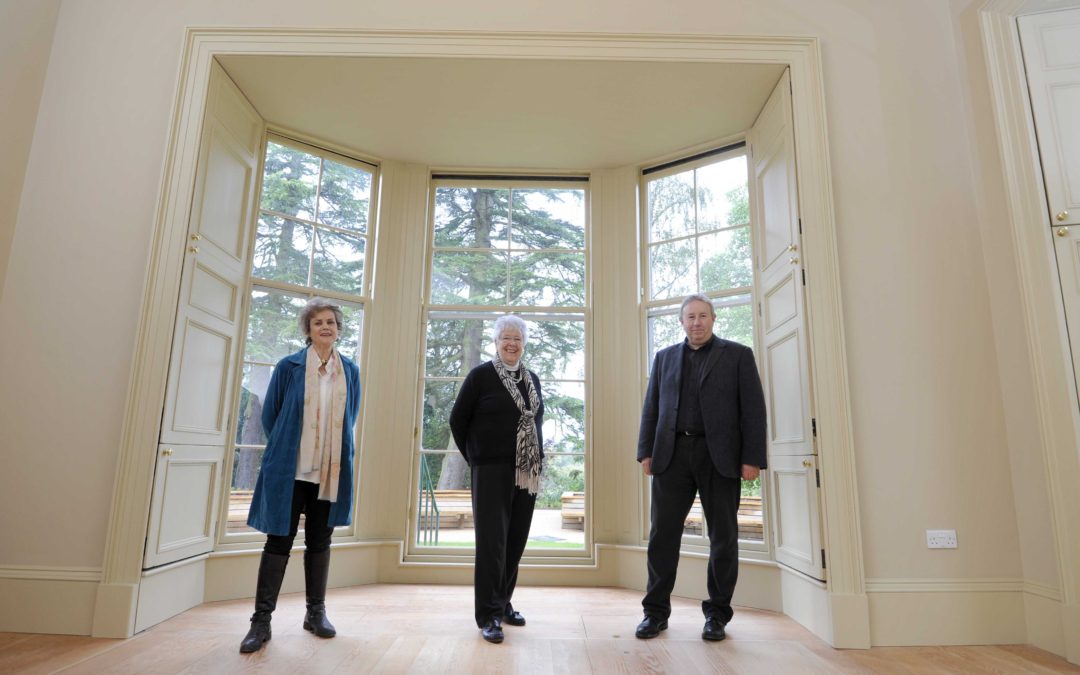 A first glimpse inside the newly restored Moat Brae House, where Peter Pan began, has revealed the extent of the work undertaken to save a Scottish architectural gem.

The B listed Georgian house, dating from 1823, was designed by Walter Newall and was regarded as being such a fine building it was often referred to as “Number One Dumfries”.

By 2009 the once luxurious house was derelict and came within three days of being bulldozed when it was taken on by a small group of volunteers. After nearly a decadethe first stage in its transformation into Scotland’s new National Centre for Children’s Literature and Storytelling is largely complete.

The Peter Pan Moat Brae Trust (PPMBT), along with LDN Architects from Edinburgh, main contractors Balfour Beatty and others have saved the house and created a new education suite to one side and café on the other.

Key parts of the project have included restoring wonderful features like the dramatic circular gallery and glass dome above the entrance hall.

The Trust recently received the keys from the contractor and is preparing for  a second transformation as it is fitted out with magical interpretation and furnished, ready for a full public opening in spring 2019.

Before that, however, a “Dreams For The Future” festival is planned by the Trust’s Youth Forum in late November to celebrate Scotland’s Year of Young People which will involve a series of events around Dumfries and at the house itself.

Two of those at the forefront of the campaign to save Moat Brae house and gardens, and to give them a new future, have been PPMBT chairman Dame Barbara Kelly and project director Cathy Agnew.

Cathy said:“When the campaign began Moat Brae was days from demolition. The roof was letting in water, the walls were saturated, the ceilings and plaster collapsing, the windows were smashed and it had been extensively vandalised.

“The transformation is breathtaking. Now you open the door and enter an elegant Georgian house full of light and space.

“We are all so proud that it is still standing, has been restored, and will soon be a major new visitor attraction.”

One small but delightful feature is an upstairs window where, during Moat Brae’s time as a hospital, nurses would take children and tell them it was the place where Peter Pan flew in.

An ongoing part of the work is the transformation of the gardens, which J M Barrie said inspired Neverland, into an area where children can play and have fun.

Moat Brae will also make a significant contribution to the economic regeneration of Dumfries.

Dame Barbara said: “Moat Brae house and gardens are of real significance in the architectural history of Dumfries and Scotland, and in the cultural and literary history of the world. J M Barrie said he spent more time in this house than any other during his teenage years in Dumfries. It was here that he and his friends let their imaginations run wild and their adventures at Moat Brae were the beginning of the story of Peter Pan.

“Now the house is restored and the new wings have been built we can focus on the next stage and get ready to open Scotland’s new Centre for Children’s Literature and Storytelling – which we hope will be enjoyed by visitors from all over this country and far beyond.

“This will bring new jobs to the town and generate income for the local economy as well as providing lots of opportunities to encourage children and young people to take joy in reading and writing.”

MoatBrae will also have an exhibition area dedicated to telling the story of Walter Newall, whose projects helped shape the architectural landscape of South West Scotland and  included churches, houses, country villas and farmsteads as well as the transformation of a Dumfries windmill into an observatory.

Mark Hopton, a Partner at LDN Architects, said:“It has been a real privilege to help the trust deliver this unique project which we hope will be a source of inspiration, learning and enjoyment for the people of all backgrounds and ages who live in and visit Dumfries; whether playing in the garden and taking part in activities in the house, enjoying refreshments in the new café with friends, or simply appreciating Walter Newall’s architecture which has now been restored to its original beauty.”

Paula Ward, VisitScotland Regional Leadership Director, said: “It is fantastic to see one of the region’s architectural gems preserved for future generations to discover and enjoy. Moat Brae House, the birthplace of Peter Pan, will create a new and inspiring experience for visitors of all ages. Of course, none of this would be possible without the incredible efforts and visions of Dame Barbara Kelly and Cathy Agnew, whose tireless hard work and never-ending passion have helped save and transform this critically important national asset.

“The project to create a National Centre for Children’s Literature and Storytelling demonstrates a real commitment to further enhancing our region’s tourism offering and attracting more visitors to Dumfries & Galloway. Scotland’s reputation as a quality destination relies on continued investment to ensure that current provision meets future demand.

“Tourism is the heartbeat of the Scottish economy, causing a ripple effect which touches every industry and community, creating employment and economic growth.”

The Neverland Discovery Garden will have Peter Pan and Neverland-themed interactive features including:

About J M Barrie and the Trust

Creative Scotland is the public body that supports the arts, screen and creative industries across all parts of Scotland on behalf of everyone who lives, works or visits here. We enable people and organisations to work in and experience the arts, screen and creative industries in Scotland by helping others to develop great ideas and bring them to life. We distribute funding provided by the Scottish Government and the National Lottery. For further information about Creative Scotland please visit www.creativescotland.com. Follow us @creativescots and www.facebook.com/CreativeScotland

About the Heritage Lottery Fund

Thanks to National Lottery players, the Heritage Lottery Fund invests money to help people across the UK explore, enjoy and protect the heritage they care about – from the archaeology under our feet to the historic parks and buildings we love, from precious memories and collections to rare wildlife. www.hlf.org.uk. Follow us on Twitter, Facebook and Instagram and use #HLFsupported.