Acclaimed Bookshop Band Sing Songs from the Bookshops of America 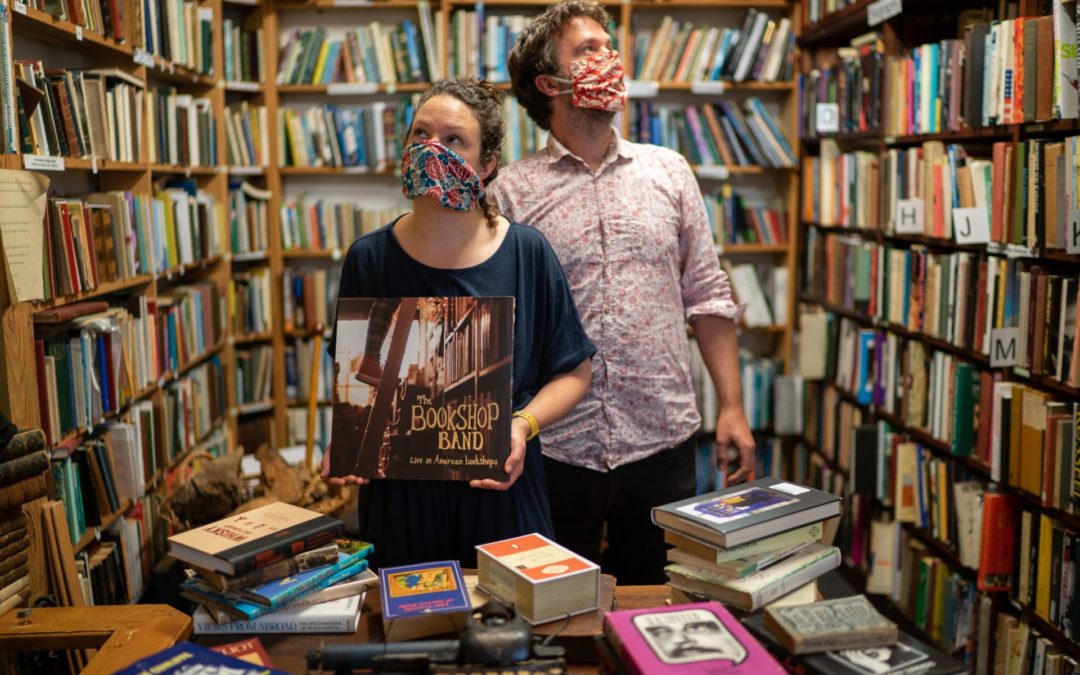 One of the country’s most enchanting folk bands is launching an album on 5 November taking listeners on a tour of literature – and some of America’s great independent book stores.

The Bookshop Band – Live in American Bookshops, a limited edition vinyl LP, is the latest recording from The Bookshop Band, a folk duo consisting of Beth Porter and Ben Please, from Wigtown – Scotland’s National Book Town.

They have made a reputation by creating songs inspired by literature, which they frequently perform in bookshops. The Who’s Pete Townshend praised them saying “I am enchanted – a great discovery and inspiration,” The Guardian said they are “A Guardian Books’ favourite”.

The new album consists of recordings made in 2019 on their debut tour of the US as they travelled round bookshops and libraries in New Jersey, New York, Colorado and New Mexico, playing songs inspired by contemporary writing and classics from the UK and North America.

Among the tracks is Once Upon A Time which is built around the first lines of books – and it’s remarkable to hear “High, high above the North Pole,” “It was the best of times, it was the worst of times” and “It was the day my grandmother exploded,” all woven together in its lyrics.

Other songs include You Make The Best Plans, Thomas, inspired by Hilary Mantel’s Bring Up The Bodies and recorded at Boulder Books (Boulder, Colorado) and How Not To Woo A Woman, inspired by Rachel Joyce’s The Unlikely Pilgrimage of Harold Fry recorded at OpCit Books (Taos, New Mexico).

Ben Please, of the multi-instrumental duo, said: “The album celebrates live music and bookshops around the world, the people who run them and the people who walk through their doors.

“We hoped to release it alongside a second US tour, but Covid-19 made that impossible. Rather than wait we thought we’d launch it now – partly in honour of all those bookshops that have been opening their doors again in this difficult time, and to remind people what amazingly special spaces independent bookshops are.”

The tour came about after The New York Times (which describes them as “achingly good”) laid down a challenge in 2018 in an article that said: “If America’s independent booksellers can’t figure a way to get The Bookshop Band to tour America, they’re doing something wrong”.

The American Booksellers’ Association were soon in touch and the band then played 24 venues in 21 days across four states.

Ben added: “Each bookshop gives a completely different ambience to the recordings, both in the spaces but also in the bustle and interaction of the audiences who were often jam-packed to within inches of being impaled by Beth’s cello bow when she hit the big notes. This album helps us cherish the memory, feeling and sounds of a time when we could play live surrounded by an audience, so that we don’t take it for granted when we are again able to do so.

“We really wanted to capture this shared experience as well as the music and celebrate the culturally important and dynamic, living spaces that bookshops are.”

This year Ben and Beth attracted a whole new audience with its Bookshop Band Breakfast Show streamed live as part of the 2020 Wigtown Book Festival – which took place online after physical events were forced to cancel.

However, the first tour made an indelible impact on their lives and created a multitude of experiences they want to share.

Beth said: “We’d been dreaming about touring the US for quite a few years, so when we got the invitation we crammed as many concerts as possible into three weeks – with our two-year old daughter in tow.

“There were times when we thought we’d bitten off more than we could chew like the day we had to leave New York for New Mexico at 4am as a huge storm approached.

“On arriving we immediately bundled into a car and drove up to the mountains in Colorado for our highest altitude concert, in a bookshop called Maria’s.

“At 28 hours long, with time zone changes, it was my longest birthday ever and it was rounded off with a lunar eclipse as we packed up.”

The tour was supported by UK book distributor Gardners and the album recorded with a grant from Creative Scotland.

Nigel Wyman, at Gardners, added: “We are very happy to have supported The Bookshop Band.  We feel a close kinship to Ben and Beth with their close ties to the book selling community. They offer something unique and entertaining, playing music and singing about something we all love – books!”

Some of the tour venues

As in the UK, independent bookshops in America are all different, sculpted by the space they are in and curated by their managers and the communities who use them.

Title Wave Books, in Albuquerque, had originally opened its doors to support the home-school communities in New Mexico.

The first concert on the tour was in Little City Books, Hoboken, New Jersey. It was run by a musician who had installed the best PA system the band had ever seen in a bookshop. Her passion was clear not only in the books on display but also in the community the shop had created who regularly came to the musical events she hosted.

Hearth Fire Books just outside Denver was also Colorado’s foremost frozen yogurt establishment and was, to date, the best smelling bookshop the band has been to. Children poured in after school for a frozen treat and a book.

The Bookshop Band – Live In American Bookshops is available from all good bookshops and record stores as well as from online services.

There is a bonus extended digital download included with the vinyl which includes songs inspired by Lewis Carroll’s Alice In Wonderland, and Shakespeare’s Richard II.

1) Once Upon A Time – using the first lines of books

2) Edge of The World – inspired by Etta and Otto and Russell and James, by Emma Hooper

1) Smog Over London – inspired by Burton and Swinburne in the Strange Affair of Spring Heeled Jack, by Mark Hodder

3) A Shop With Books In – inspired by bookshops

4) You Make The Best Plans, Thomas – inspired by Bring Up The Bodies by Hilary Mantel

5) Cackling Farts – inspired by The Horologicon, by Mark Forsyth

6) We Are The Foxes – inspired by Glow by Ned Beauman

Creative Scotland is the public body that supports the arts, screen and creative industries across all parts of Scotland on behalf of everyone who lives, works or visits here. It enables people and organisations to work in and experience the arts, screen and creative industries in Scotland by helping others to develop great ideas and bring them to life. It distributes funding provided by the Scottish Government and the National Lottery. For further information about Creative Scotland please visit www.creativescotland.com. Follow @creativescots and www.facebook.com/CreativeScotland.